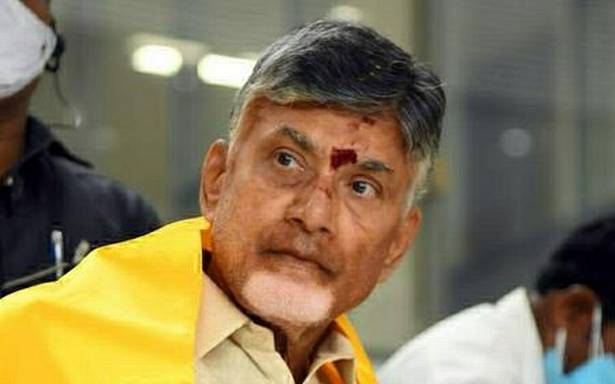 Telugu Desam Party (TDP) leader N. Chandrababu Naidu is actively seeking help and protection for his partymen from the Central government, and the invocation of President’s Rule in Andhra Pradesh after his party headquarters was attacked and stoned by miscreants, who, Mr. Naidu claims, are being shielded by the ruling YSRCP government.

For Mr. Naidu, the two-day trip to Delhi where he called on President Ram Nath Kovind with a delegation, asking for the imposition of Article 356 on Andhra Pradesh, but missed out on a meeting with Union Home Mnister Amit Shah, ostensibly because of a delay in the latter’s return from Jammu and Kashmir, was a bitter sweet one.

“Our party headquarters in Vijaywada is just half a kilometre away from the AP DGP’s (Director General of Police) office and very close to the Fifth Battalion also, but we got no help. We got help when we appealed to the Central government,” Mr. Naidu said speaking to The Hindu. “I and my partymen are being targeted because we have raised the issues of a drug mafia that enjoys government protection,” he said, adding that TDP workers need protection.

The parting of ways between Mr. Naidu and the BJP-led NDA, on the question of according special status for Andhra Pradesh following the formation of Telangana, was not happy one. The TDP-Congress alliance after the split and the rather personal attacks during the campaign for the 2019 general election made the parting more bitter.

Mr Naidu, however, says that his departure from the NDA was “only to keep the State’s interests in mind” and did not otherwise pertain to any major ideological breach between the TDP and the BJP. While not explicitly expressing any regrets on his break with the NDA, his response to questions on a rethink was that he had done the split for the sake of the State, but adding that it was “also true” that “people did not support us (TDP) in two elections” following the split.

The TDP has, in the past, been at the helm of several efforts to forge “third front” formations, but Mr. Naidu did not express much enthusiasm about current efforts to forge a regional parties powered front against the BJP, saying that the time was not right for such moves. On whether he was open to exploring a return to the NDA, he said: “We must explore it, otherwise others will exploit us.”

A clear statement that Mr Naidu feels the need for strong political allies to face the hostile political climate in Andhra Pradesh with regard to the YSRCP and Chief Minister Jagan Mohan Reddy.

While Mr. Naidu had to return home without a meeting with Mr. Shah, he has told his aides that he will persist with his efforts at securing Central help and support for his party workers who feel “under siege” at the moment.

“Amit Shahji returned late from Jammu and Kashmir and has meetings of the Union Council of Ministers to attend this evening,” said a source adding that Mr Naidu told aides that he will be back in Delhi once an appointment is firmed up. The politics in Andhra Pradesh, seems to be coming full circle.