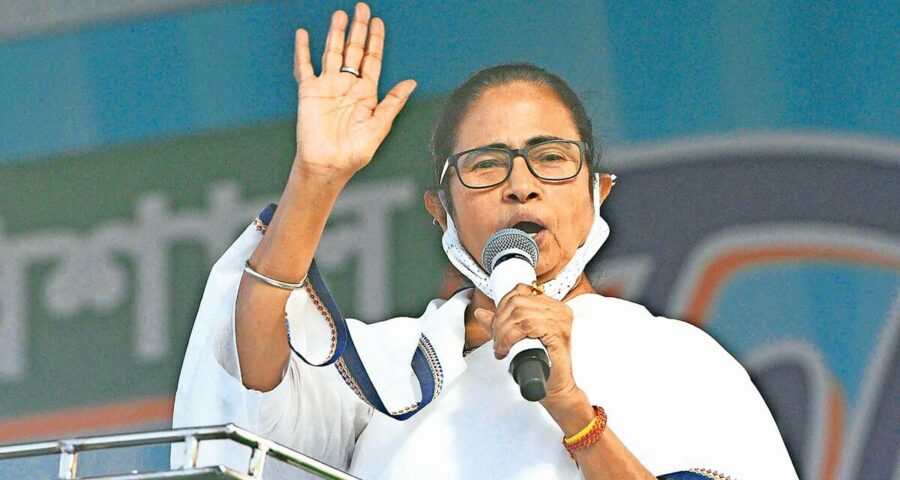 “Our priority is to work for the people. When the BJP govt in Delhi cannot compete with us in politics, they use agencies… Few people had left us but now they have returned because they know that their home belongs here (TMC),” Banerjee said. West Bengal Chief Minister Mamata Banerjee Saturday alleged that the central government was using agencies to fight the Trinamool Congress as they can’t fight the party politically. Banerjee’s comments comes in the backdrop of the Enforcement Directorate (ED) summoning her nephew and MP Abhishek Banerjee and his wife for questioning in a money laundering case linked to an alleged coal scam in the state.

“Our priority is to work for the people. When the BJP govt in Delhi cannot compete with us in politics, they use agencies… Few people had left us but now they have returned because they know that their home belongs here (TMC),” Banerjee was quoted as saying by news agency ANI.

She was addressing the gathering on the occasion of TMC Chhatra Parishad Foundation Day at Kalighat.

“Why do we say Jai Hind, Vande Mataram and Khela Hobe? We believe students are the ones who start moving forward with helpless people. They’re the future. BJP is suppressing the voices of students, teachers, government employees and on social media. I want them to become new equation of politics. I want students of West Bengal to lead the path. The BJP government is inhuman. This govt doesn’t love people and is selling the country,” she added.

“BJP ministers are hand in glove with coal mafia and have stayed at hotels run by them during elections. I have never come across such a vindictive party and a government in my political life. If you (BJP) show us ED, we will also send proof against BJP leaders to the central agency,” news agency PTI quoted Banerjee.

Banerjee further said that National Human Rights Commission and all other commissions “have become political and all their members are from BJP”.

“In post-poll violence, 5 BJP workers and 16 TMC workers had died. We have no problem with CBI, but why are they taking BJP leaders with them to villages? she asked.

Meanwhile, Abhishek Banerjee said, “BJP thinks it can put pressure on us by using ED against us but we will emerge stronger”.

Earlier in the day, Abhishek Banerjee who represents the Diamond Harbour seat in Lok Sabha and is also the national general secretary of the Trinamool Congress, was summoned to appear before the investigating officer of the case in Delhi on September 6 while his wife Rujira Banerjee has been sent a similar summons under the Prevention of Money Laundering Act (PMLA) for September 1.

The case, filed under criminal sections of the (PMLA), was filed by the ED after studying a November, 2020 FIR of the CBI that alleged a multi-crore coal pilferage scam related to the Eastern Coalfields Ltd mines in the state’s Kunustoria and Kajora areas in and around Asansol.

Local state operative Anup Majhi alias Lala is alleged to be the prime suspect in the case.

The ED had earlier claimed that Abhishek Banerjee was a beneficiary of funds obtained from this illegal trade. He has been denying all charges.