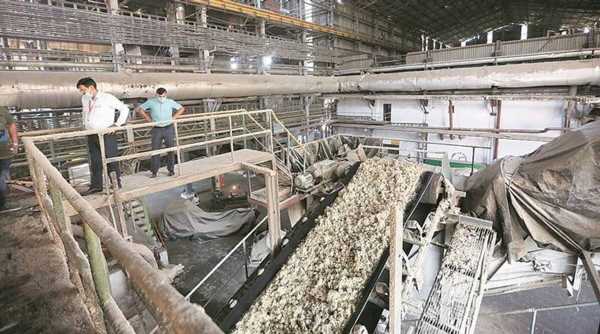 The Centre has allocated about 78,000 tonnes of rice from Food Corporation of India (FCI) stocks at a subsidised rate of Rs 20 per kg to distilleries for ethanol production for the ethanol supply year (ESY) 2020-21 (December-November), Union Food Secretary Sudhanshu Pandey said on Tuesday.

Addressing a press conference via video conference, Pandey said, “By 2025, total production of ethanol… it is going to be grain-based 740 crore liters and sugar-based 760 crore liters. So, overall, 1,500 crore liters supplies we are targeting.”

“The share of rice is miniscule and it is transitory,” Pandey said answering a query about the government’s decision to supply FCI rice to distilleries at a subsidised rate.

“Today, in the country, the grain-based distillery capacity is just about 258 crore litres and that is already committed to production of alcohol-based products. We were able to supply about 16 crore litres [ethanol] last year and this year it is going to be about 38 crore liters.”

“But the contribution of rice again in this is negligible. Why has rice been introduced? The commitment has come only for 3 lakh tonnes but actually at about six places and our total lifting will be about only 78,000 tonnes of rice,” Pandey said.

He said, “The rice utilisation is to provide that stability… But the rice mix is to provide continuity and a transitory phase so that whatever investment goes in the distilleries, and if they do not have access to enough maize, then they can access rice.”

When asked whether the difference between the economic cost of rice – Rs 37 per kg – and the Rs 20 per kg rate, being charged from distilleries, will be counted as food subsidy, Pandey said, “We will do the accounting once we know the exact figure how much has been used. The food subsidy is the food subsidy part.”

Last year, the Centre had allowed procurement of surplus FCI rice by grain based distilleries at Rs 20 per kg (Ex-FCI Godown) for production of ethanol to be supplied to oil marketing companies under the Ethanol Blending Programme (EBP). As per Food Ministry figures, a quantity of 12,956 metric tonnes of rice has been lifted by six distilleries till April 30, 2021.

The Food Secretary also noted that ethanol production from sugarcane has limitations and the ethanol expansion is going to happen in grain-based distilleries only.

The government has set a target of blending 20-percent ethanol with petrol by 2025-26. To achieve that target, over 1,000 crore liters of ethanol will be required to blend with the petrol. While half of this will come from the sugar the rest will come grain-based distilleries.

As per the Food Ministry estimates, about 165 lakh tons of grains will be utilized to produce the required ethanol from grains in 2025.

As per the data available with the food ministry, till 31st May 2021, ethanol blending has reached 7.7% and by end of the current ethanol year, the government expects to achieve 8-8.5% blending.

According to source, about 189 proposals out of 422 have been approved for setting up of new/expansion distilleries for making ethanol from grains so far which would have total installed capacity to make 765 crore litres.