Teachers alleged that they have been given “social media targets” to get maximum likes, shares and comments from the Facebook accounts of students, parents and their siblings. 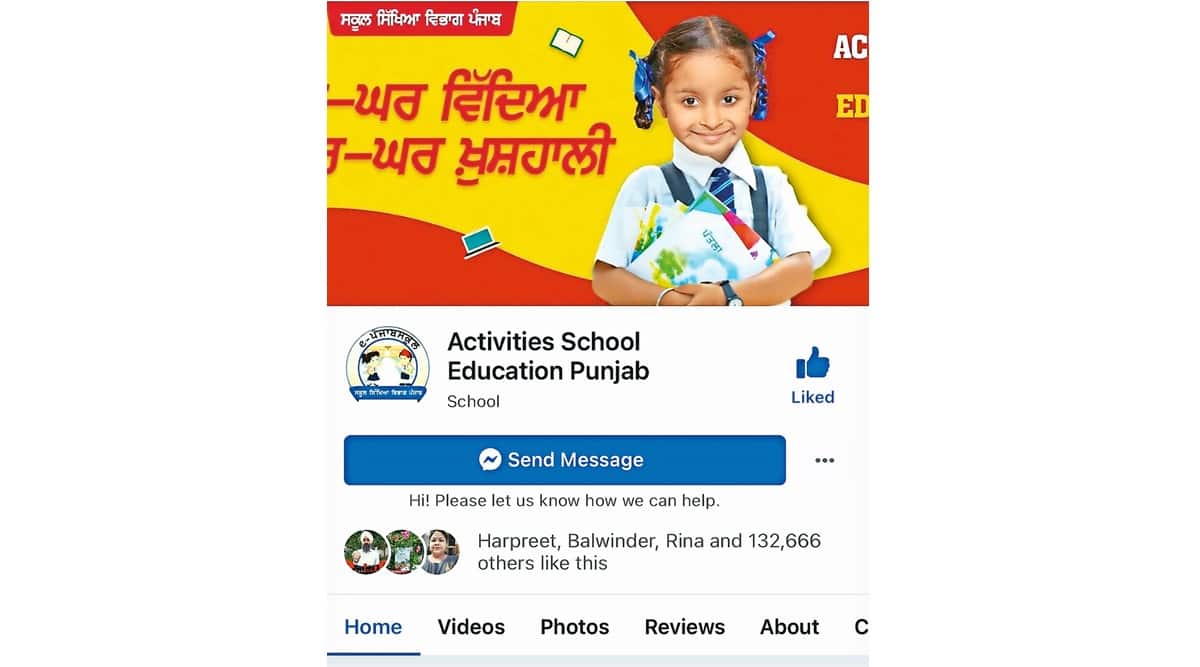 DAYS AFTER Punjab topped the Centre’s Performance Grading Index (PGI) in the school education sector for 2019-20, government school teachers have alleged that they are being forced to collect ‘likes’, ‘shares’ and ‘comments’ on the Facebook page of the education department’s official page — ‘Activities School Education Punjab’ and other related pages.

They also alleged that they have been given “social media targets” to get maximum likes, shares and comments from the Facebook accounts of students, parents and their siblings.

In Nawanshahr (SBS Nagar), a target has been set for each teacher to get at least 10 likes, 10 comments and 10 shares on the education department’s posts and take their screenshots for record.

In the case of children aged less than 13 years, who cannot have their own Facebook accounts, the department has ordered teachers to get accounts created of parents and siblings of such students and even keep a record of their passwords, the teachers alleged.

Currently having more than 1.32 lakh ‘likes’, the ‘Activities School Education Punjab’ Facebook page was created by the education department to “promote” activities of government schools.

Teachers said that as per orders shared on their official WhatsApp groups, each district has been given a date on which teachers from that particular district have to get ‘likes, comments and shares’ on the page. The ‘drive’ started on June 10 and will continue till July 1. For instance, it is the turn of teachers from SBS Nagar (Nawanshahr) on June 17, Ludhiana on June 18, Faridkot on June 19, Rupnagar on June 20 and so on. The orders further state that a “daily analysis” of new likes, comments and shares will also be done and a meeting will be held every Saturday at 6 pm to discuss it. “We have been told to get Facebook accounts opened of parents and siblings of those children who are aged 13 or less. District education officers have even told teachers to keep a record of email IDs and passwords of such Facebook IDs and if need be, we should log into them and like, share and comment on the posts of the education department’s page. They are indirectly asking us to create fake Facebook IDs and advertise pages of the education department. Are we teachers or IT cell employees who should do this work?” asked Gurpreet Singh of the Democratic Teachers Front.

“It is complete encroachment of a person’s fundamental right to freedom of speech and expression,” said another teacher.

In Nawanshahr, the district education officer has issued written orders which state that a “healthy competition” is being conducted among districts to promote the activities page of the education department: Each teacher has to get at least 10 likes, 10 shares and 10 comments from 11 pm on June 17 to 11 pm on June 18. Nine teachers have also been put on duty to supervise and see that the ‘target’ is met.

Speaking to The Indian Express, Jagjit Singh, district education officer (DEO, secondary), Nawanshahr, who issued the orders, said, “It is not just for Nawanshahr but entire Punjab that teachers are being encouraged to promote the activities of our department among parents and others. If we have worked hard in the past three years and made government smart schools, it is very important that work should reach parents and others so that more children take admission in government schools. We will not question teachers who won’t do it,” he said.

Charanjit Singh, deputy DEO, Ludhiana, said teachers are not being “forced” but “motivated” to promote government school activities on Facebook. “We are only motivating teachers to promote their own hard work. If Punjab has topped PGI nationally, it our right as well as duty to showcase work of our teachers. For students aged less than 13, we have asked teachers to get their parents or siblings on FB but at least in Ludhiana, no teacher is being forced,” said the officer.