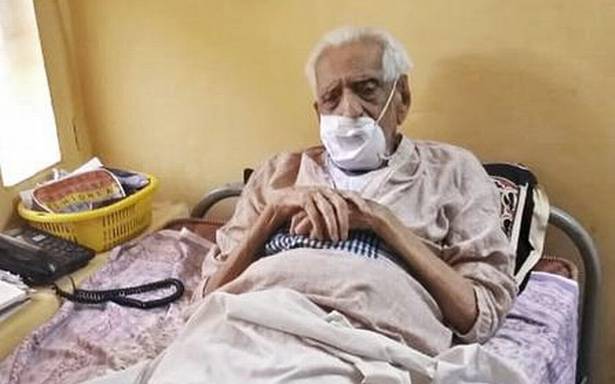 Centenarian freedom fighter and citizen activist H.S. Doreswamy, who was hospitalised after being diagnosed with COVID-19 a week ago, was discharged on Wednesday.

“COVID-19 is no demon to be afraid of. If you receive proper and timely medical guidance and care, it can be won over easily. I am a good example of that,” Mr. Doreswamy told The Hindu from his home on Wednesday.

While he was lucky to have received timely medical care, he said he feels sad and angry at the chaos the society has been pushed into “by ill-prepared and inefficient governments across the country during the second wave”.

“Scientific advice seems to have been given a go-by landing us in this helpless situation. The government is responsible for a lot of deaths during this second wave,” he said.

Dr. C.N. Manjunath, Director, Jayadeva Institute of Cardiovascular Sciences and Research, who treated him, said Mr. Doreswamy, with a history of cardiac issues, was admitted to the hospital, complaining of fatigue, cough and fever, and later tested positive for COVID-19.

“He experienced fever and fatigue for a few days. His oxygen saturation never dipped and luckily he did not develop any complications. He was discharged on Wednesday in a stable state and is advised rest and a follow-up five days later,” he said.

The centenarian’s calm mind, cool and composed manner has had a healing effect and aided his recovery, Dr. Manjunath said. “He was never anxious nor showed any apprehensions. He had the self-confidence that he would win this and that helped a lot, something other patients must try to emulate,” he said.