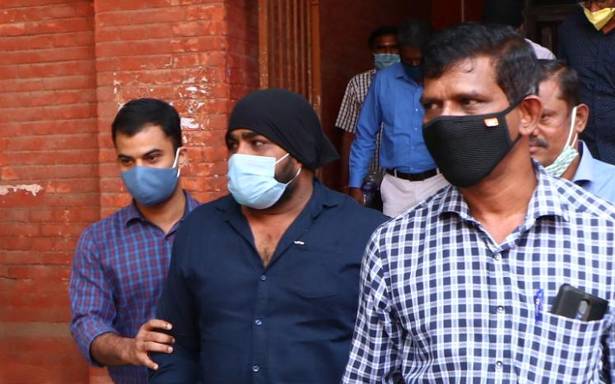 The CBI team arrested K. Arulanantham, who was the AIADMK Pollachi town students’ wing secretary, along with two others, in the case of a 19-year-old and several others being sexually assaulted and blackmailed

The Central Bureau of Investigation (CBI) has arrested three more persons including a student wing leader of the AIADMK in the sensational Pollachi sexual assault case.

The three accused were produced before the Mahila Court in Coimbatore around 10.30 a.m. on Wednesday and Judge R. Nandhinidevi remanded them in judicial custody till January 20.

The police held talks with members of the All India Democratic Women’s Association and DMK’s women’s wing who gathered outside the Combined Court Complex in Coimbatore for a protest against the three accused arrested by the CBI in the Pollachi sexual assault case on Wednesday /  | Photo Credit: Periasamy M

The case pertains to the alleged sexual assault by the accused of a 19-year-old girl near Pollachi on February 12, 2019. The investigation found that the accused also allegedly filmed the act and blackmailed the girl.

Following the arrest of Thirunavukkarasu, Rishwanth, Sathish and Vasanthakumar by the local police after the incident, a few video clips of unknown men sexually assaulting girls were leaked. It was alleged that the accused subjected several women to sexual assault and and filmed the act. The investigation was handed over to the CB-CID which named Manivannan as the fifth accused.

The CBI took over the investigation in April 2019 and filed a chargesheet against the five accused in May 2019.

In December 2020, the CBI obtained the court’s permission to collect voice samples of the accused and subject them to a forensic analysis. This was to ascertain whether the voices of men heard in the leaked videos were that of the accused.