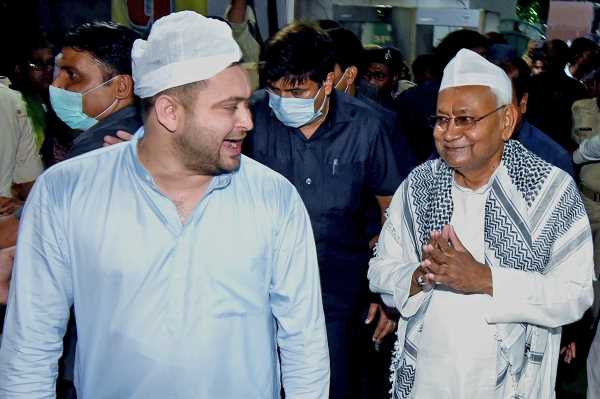 The JD-U and the Opposition RJD are united on a caste census in Bihar, which the BJP is opposed to.
M I Khan reports from Patna.

Bihar will be the first state in the country to conduct a caste census.

Chief Minister Nitish Kumar has called an all-party meeting at 4 pm on Wednesday, June 1, to finalise the modalities for conducting a state-wide caste-based census.

Nitish Kumar wanted to hold this meeting nearly nine months ago. Last August, he had led a delegation of 10 parties from Bihar — including the Bharatiya Janata Party and Lalu Prasad Yadav’s Rashtriya Janata Dal — to Delhi, where they had met Prime Minister Narendra Damodardas Modi.

After the meeting, Nitish Kumar had said all 10 parties spoke in one voice about the ‘need’ for a caste-based census and asserted that statistics about different castes will help formulate development schemes effectively as many people have not benefited so far.

The BJP was not keen and the all-party meeting in Bihar was deferred; Kumar, then, did not want to antagonise his powerful ally.

Going by recent developments, it is clear the chief minister has made up his mind to go ahead.

His decision is being widely considered the result of his recent proximity to RJD leader Tejashwi Yadav, who had repeatedly demanded an all-party meeting to discuss the caste census.

On May 11, in a move that surprised BJP leaders, Kumar invited Tejashwi — who is Leader of the Opposition in the Bihar assembly — to his residence where the two leaders discussed the caste census in a meeting that lasted nearly an hour.

Nitish Kumar assured Tejashwi that his government is serious about the census and would call an all-party meeting at the earliest to discuss the matter.

Their meeting took place after Tejashwi issued a 72 hour ultimatum, asking the chief minister to clarify his stand on conducting the caste census in the state.

Lalu, who was undergoing medical treatment in Delhi after being granted bail in the fodder scam case, flew to Patna on Thursday, May 26, 2022 after the June 1 meeting was called.

In the past, the RJD has led protests and fasts demanding the caste census. Unlike other parties, it has projected this issue as part of its agenda.

Since 2015, Lalu has been demanding that data from Socio Economic and Caste Census 2011 be made public to ‘ensure the empowerment of all those lagging behind in development’.

Nitish Kumar and Lalu’s stand is being seen as a political strategy to strengthen their support base among the other backward classes, extremely backward castes and Dalits. The veteran leaders understand the huge political ramifications, and benefits, that a caste census can have.

It will strengthen the demand for raising the quota for the OBCs, who are estimated to be more than 50 per cent of the population and presently get 27 per cent reservation.

While the BJP has agreed to attend the June 1 meeting, sources in the party say its upper caste leaders — including MPs, MLAs and ministers — are uncomfortable with a caste-based census.

They seem to fear that an actual count of the OBC population might prod regional parties to demand more quotas in central government jobs and educational institutions and want the BJP’s Bihar unit to follow the central government’s stand — which had ruled out a caste-based census last year — and reject Nitish Kumar’s demand.

Senior BJP leaders — including Kumar’s cabinet colleague Amrendra Pratap Singh, who is the minister for co-operatives, and Rajya Sabha MP Vivek Thakur — have publicly voiced their opposition to a caste census.

Differences over the caste census have surfaced time and again between the National Denocratic Alliance partners, with leaders from Nitish Kumar’s Janata Dal-United in favour and the BJP leaders opposed.

Even as recently as May 23, Nitish Kumar — without naming the BJP’s reluctance — said all parties had not made known their decision to attend the all-party meeting. But the unsaid was underlined because, in February, he had stated that all parties in Bihar, except the BJP, had made known their stance on conducting a caste based census in the state.

JD-U national President Lalan Singh has supported Tejaswi’s demand and repeatedly made it clear that the JD-U would not back down from a caste census.

Last week, Nitish Kumar clarified, ‘We will call an all-party meeting soon to discuss this matter; it will not take more time. Every party will make its stand clear on this issue and the government will consider all the suggestions. After that, the state cabinet will approve the proposal to conduct a caste-based census.’