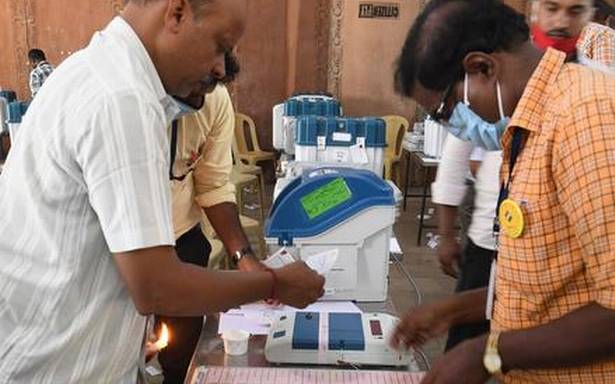 The process of candidate setting, wherein the ballot papers containing name, symbol and photographs of each candidate, in each of the 5,058 ballot units for seven Assembly constituencies in Virudhunagar district began on Wednesday.

Virudhunagar Collector and District Election Officer, R. Kannan, inspected the exercise being carried out at three centres in Virudhunagar, Kariyapatti and Aruppukottai.

Besides setting the ballot papers, the officials have to take up their sealing with appropriate forms.

The officials have already sent 2,965 control units and 3,085 VVPAT machines to 2,370 polling booths in the seven Assembly constituencies.

Later in the day, Mr. Kannan along with Virudhunagar District Superintendent of Police P. Perumal, inspected the facilities at the vote counting centre at Sri Vidhya College.