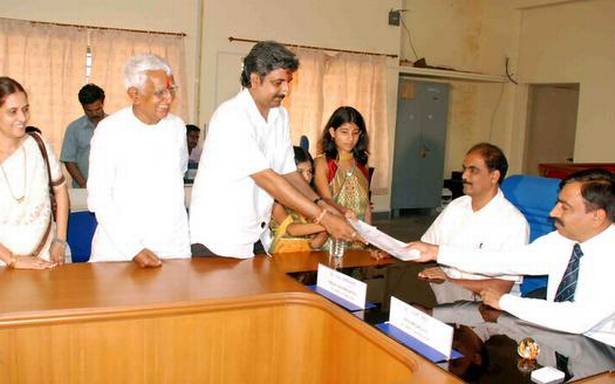 The Bharatiya Janata Party high command has again sprung a surprise with respect to selection of candidates. The party has decided that Shivaraj Sajjan would be its candidate for the by-election from Hangal Assembly constituency even though everyone expected the ticket to go to Revathi, daughter-in-law of the late C. M. Udasi.

However, there is no surprise with respect to the by-election in Sindgi constituency. The party has decided on Ramesh Bhusanur whose name had been doing rounds for some time.

Ms. Revathi’s name was among several names shortlisted by the BJP State core committee for the Assembly by-polls. The by-polls had been necessitated by the death of MLAs C.M. Udasi and M. C. Manguli.

Not giving the ticket to Ms. Revathi is being interpreted in different ways in BJP circles. A section of party leaders feel that the parameters adopted for candidate selection is in tune with established norms of not encouraging dynastic politics. They point out that Ms. Revathi’s husband Shivakumar Udasi is a member of parliament representing Haveri.

A few leaders also feel that the party would have been obliged to bring B. Y. Vijayendra, son of former chief minister B. S. Yediyurappa, into poll politics if it had given a ticket to Ms. Revathi. The Udasi family is close to Mr. Yediyurappa.

Also, just a day earlier, BJP leaders had accused JD(S) leader H. D. Kumaraswamy of indulging in family politics. Replying to such allegations, Mr. Kumraswamy had said that family politics is now prevalent in the BJP too.

October 8 is the last day for filing nominations, and polling would be held on October 30 in the two constituencies.