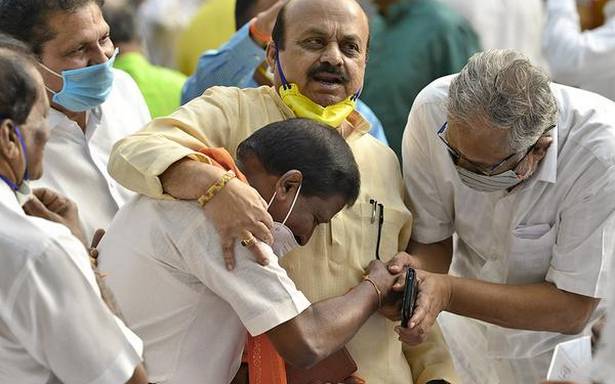 Even as the Chief Minister expanded the State Cabinet and inducted seven new faces, he had his hands full firefighting discontent brewing among a long list of ministerial aspirants who failed to make the cut. BJP national general secretary Arun Singh also met several of these disappointed aspirants and assured them of “opportunities ahead”, sources said.

The Chief Minister had a tough time pacifying defectors from other parties – H. Nagesh who was dropped from the Cabinet and Munirathna, who did not make it. Both of them also met Mr. Singh. “The Chief Minister had assured me that I would be a Minister for the full term. However, out of respect for his words, I have resigned,” Mr. Nagesh said.

Another defector and MLC A.H. Vishwanath was bitter. “It is by our gratis that Mr. Yediyurappa is Chief Minister today. But he has back-stabbed us by dropping Mr. Nagesh and not making Mr. Munirathna a Minister even after publicly assuring he would during the bypoll campaign,” he said. Mr. Munirathna did not speak to media on Wednesday.

Meanwhile, the induction of MLC C.P. Yogeshwar angered many MLAs who hoped to secure a berth in the Cabinet. “Five MLCs have been made Ministers. It is not good for the party if youngsters and those working hard for the party are not recognised,” said Arvind Bellad, a two-time MLA. Chief Minister’s political secretary M.P. Renukacharya also expressed his displeasure. “I do not understand why those who were defeated in elections are made Ministers,” he rued adding he would announce his “decision” soon. He met both Mr. Yediyurappa and Mr. Singh, and is reported to have been pacified.

Mr. Singh answering a question by mediapersons, said it was the Chief Minister’s decision to induct Mr. Yogeshwar into the Cabinet.

Meanwhile, Bengaluru MLA Satish Reddy questioned Mr. Yediyurappa as to what were the criteria for selection of Ministers. “We are acutely feeling the absence of a leader like H.N. Ananth Kumar who used to give a patient hearing to our problems,” he tweeted. Chitradurga MLA G.H. Thippareddy rued that only those who lobbied were made Ministers. “After 50 years of being in politics, I feel it has all gone to waste if no one recognises me,” he lamented.

Mr. Singh, who left for Delhi Wednesday evening, said the Chief Minister would personally talk to all the legislators who are dissatisfied at not being able to make it to the Cabinet. “They will get other chances in the party. They must wait,” he said.

A few dissatisfied MLAs, meanwhile, have decided to meet Union Home Minister Amit Shah and air their grievances when he visits the State on January 16 and 17.