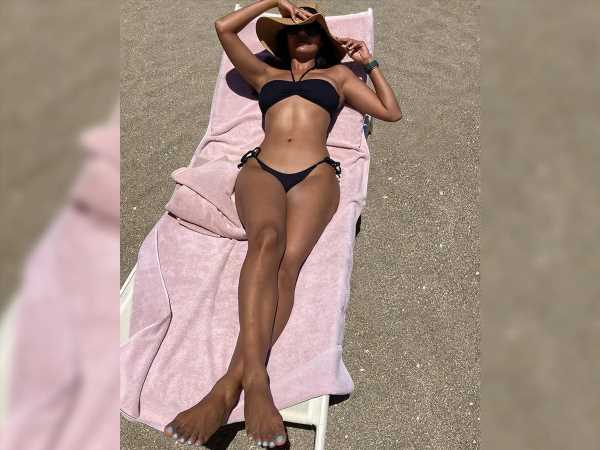 The bombshell Esha Gupta is a popular name in Indian film Industry. She is popular for sharing her h*t and b*ld pics from photoshoots. Once again, Esha Gupta shared her bikini pic on Instagram which is giving sleepless nights to her fans and the followers.  She is seen wearing a two piece black bikini on sand.

On several occasions,  the  actress, model, and the winner of the Miss India International title of 2007, Esha Gupta has been trolled on social media sites because of her bikini show.   But she is one who never hesitates to flaunt her bikini body.  She has 5.3 million followers on Instagram.  By sharing her bikini pic, once again Veedevadu  actress has proved that she is one of the h*ttest celebrities.

She looks h*t as hell in a two piece black bikini. The actress has never failed to impress her fans with her h*tter than h*t avatar.

She  made her debut in Telugu film Industry with Veedevadu, in which she worked with Sachiin Joshi. She made her debut in Bollywood with Emraan Hashmi starrer romantic drama Jannat 2.  She is known for acting in Paltan, Rustom, Raaz 3, Baadshaho.

In Tollywood, she was last seen in Ram Charan and Kiara Advani starrer action drama Vinayak Vidheya Rama, where she was seen shaking a leg for the special song.