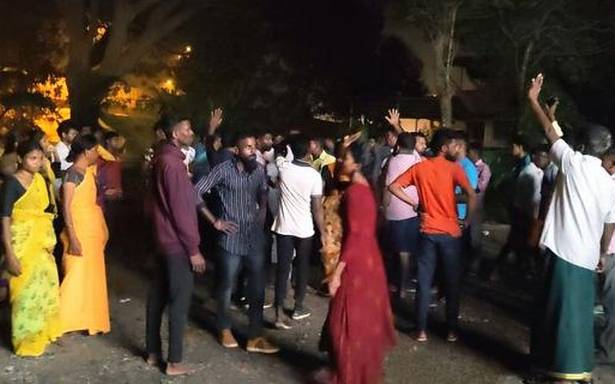 The police received several complaints about loud music being played there

A team of policemen from Udupi’s Kota Police Station, led by a Sub-Inspector of Police, is said to have stormed into a Mehndi function that was going on in a colony of Koraga tribal community and assaulted the bridegroom and others at Kotatattu village on Monday night.

Kotatattu is a place from where Minister for Social Welfare Kota Srinivas Poojary hails. The Mehndi function was being held in the house of Gulabi, a resident. Her grandson’s marriage is scheduled on Wednesday.

Dalit activist Sunder Master told reporters that some people complained to the police about loud music being played at the venue. Though Gulabi’s family members assured them of winding up the event at 11 p.m., the police team, led by Sub-Inspector Santosh, resorted to a lathicharge against Gulabi’s family members and others who were attending the event. Several innocent people, including the bridegroom, have suffered injuries, he said.

Sub-Inspector Santosh and other members of the team should be placed under suspension, he said.

Mr. Vishnuvardhan told reporters that the police went twice to the venue after complaints were made by residents about loud music being played there but the event continued unabated. Sub-Inspector Santosh and six police personnel went to the venue after a third complaint came.

Meanwhile, condemning the action taken by the police, Mr. Poojary said that the function was organised by people whom he knew closely. And, nine innocent people were injured in the lathicharge. In a statement, Mr. Poojary said that the State Government will not tolerate such action. And, he has asked Mr. Vishnuvardhan to take strict disciplinary action against the police personnel concerned.

Kundapur MLA Halady Srinivas Shetty too condemned the incident during his visit to the place on Tuesday. He apologised before the victims for the conduct of the police. Udupi district BJP president Kuilady Suresh Nayak has also demanded action against the police personnel.