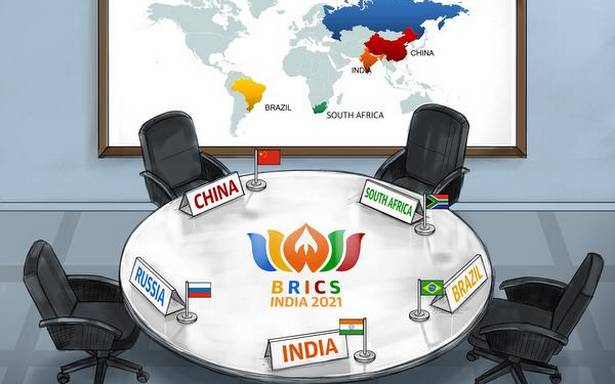 As India is gearing up to host this year’s BRICS summit, the grouping is facing fresh challenges, from disputes among member countries to tackling COVID-triggered crises and opportunities

India, Brazil and South Africa have equal, if not stronger, strategic ties with western powers today, prompting Rachel Salzman, author of Russia, BRICS, and the Disruption of Global Order, to ask whether BRICS is a bridge between the east and west or whether it is being positioned as a bulwark against them.

To be clear, BRICS was not invented by any of its members. In 2001, Goldman Sachs’ Jim O’Neill authored a paper called “Building Better Global Economic BRICs”, pointing out that future GDP growth in the world would come from China, India, Russia and Brazil.

Significantly, the paper didn’t recommend a separate grouping for them, but made the case that the G-7 grouping, made up of the world’s most industrialised, and essentially Western countries, should include them. Mr. O’Neill also suggested that the G-7 group needed revamping after the introduction of a common currency for Europe, the euro, in 1999. In 2003, Goldman Sachs wrote another paper, “Dreaming with BRICs: Path to 2050”, predicting that the global map would significantly change due to these four emerging economies, and that BRIC economies combined would outstrip the western dominated world order before 2039.

In 2006, leaders of the BRIC countries met on the margins of a G-8 (now called G-7) summit in St. Petersburg, Russia, and BRIC was formalised that year. The global financial crisis of 2007-08 reinforced the idea as BRIC countries had been relatively unscathed in the market collapse. On June 16, 2009, Prime Minister Manmohan Singh met with Presidents Hu Jintao, Dmitry Medvedev and Lula da Silva for the first BRIC summit in Yekaterinburg, and South Africa was subsequently admitted two years later.

Common ground for the members was built by ensuring that no bilateral issues were brought up, but the contradictions remained. Many economists soon grew tired of “emerging” economies that didn’t reach the goals they had predicted. Others saw India’s closer ties with the U.S. after the civil nuclear deal as a sign its bonds with BRICS would weaken. Meanwhile, Russia, which had hoped to bolster its own global influence through the group, had been cast out of the G-7 order altogether after its actions in Crimea in 2014. China, under Xi Jinping, grew increasingly aggressive, and impatient about the other underperforming economies in the group, as it became the U.S.’s main challenger on the global stage.

China’s decision to launch the trillion-dollar Belt and Road Initiative in 2017 was opposed by India, and even Russia did not join the BRI plan, although it has considerable infrastructure projects with China. South Africa’s debt-laden economy and negative current account has led some to predict an economic collapse in the next decade. Brazil’s poor handling during the Covid-19 crisis has ranked it amongst the world’s worst-affected countries, and its recovery is expected to be delayed. India’s economic slowdown was a concern even before Covid-19 hit, and government policies like “Aatmanirbhar” were seen as a plan to turn inward.

Meanwhile, concerns about aggressions from Russia in Ukraine and Eastern Europe and China in the South China Sea, the border with India and internally in Hongkong and Xinjiang, as well as creeping authoritarianism in democracies like Brazil and India have made investors question long-term prospects of the group.

In the market, BRICS has been mocked for being “broken”, while others have suggested it should be expanded to include more emerging economies like Indonesia, Mexico and Turkey, called the “Next-11”. Others suggested BRICKS (including South Korea).

Perhaps the biggest blow to the BRICS firmament was dealt by the very company that laid its foundations: In 2015, Goldman Sachs wound up its BRIC fund, which had reportedly lost 88% of its asset value since 2010, and merged it with a larger emerging markets fund. In an article he wrote for Project Syndicate in 2021, to mark the idea of “BRICs at 20”, Mr. O’Neill said he was disappointed by the group’s performance but hadn’t lost hope entirely.

All the contradictions and criticism notwithstanding, BRICS is an idea that has endured two decades, an idea its members remain committed to, and not one has skipped the annual summits held since 2009. Along the way, BRICS has created the New Development Bank (NDB) set up with an initial capital of $100 billion, a BRICS Contingent Reserve Arrangement fund to deal with global liquidity crunches, and a BRICS payment system proposing to be an alternative to the SWIFT payment system.

While its raison d’etre was economic, BRICS statements have always been deeply political, calling for more inclusion in the multilateral world order, decrying U.S.-Europe backed military interventions, and expressing an independent line on several world events from Afghanistan to West Asia.

India is set to host the BRICS summit under Prime Minister Narendra Modi’s chairmanship, either virtually or in person with Presidents Vladimir Putin, Xi Jingping, Jair Bolsonaro and Cyril Ramaphosa later this year. The BRICS ministerial meeting held this week sent several important signals to that end, issuing two outcome documents, including the first “standalone” joint statement on reforming multilateral institutions, including the UN and the UNSC, International Monetary Fund and World Bank and the World Trade Organization.

It remains to be seen how far countries like China and Russia, which are already “inside the tent” at the UNSC, will go in advocating for the other BRICS members to be a part of a reformed Security Council.

Another important agreement was the BRICS ministerial decision to support negotiations at the WTO for the waiver of trade-related intellectual property rights (TRIPs) for vaccines and medicines to tackle the Coronavirus pandemic. While it stopped short of backing the India-South Africa proposal for a three-year waiver, something Brazil has been holding out given opposition from big Pharmaceutical companies, BRICS support at the WTO for the TRIPs waiver negotiations will be a boost for the effort. It will also be interesting to watch how BRICS countries move ahead on a “BRICS Vaccine Centre”, proposed to be based in Johannesburg, given that at least three members — Russia India and China — have manufactured a substantial chunk of all globally authorised vaccines.

What appears clear is in the post-Covid world, priorities for all economies will change, and offer up a churning in the world of the kind seen two decades ago, when the idea of a grouping of emerging economies was first floated. For BRICS, the next few months could crystallise that idea, or sink it further, leaving others to wonder whether the “Rise of the Rest” as it was once called, is an idea whose time will ever come at all.