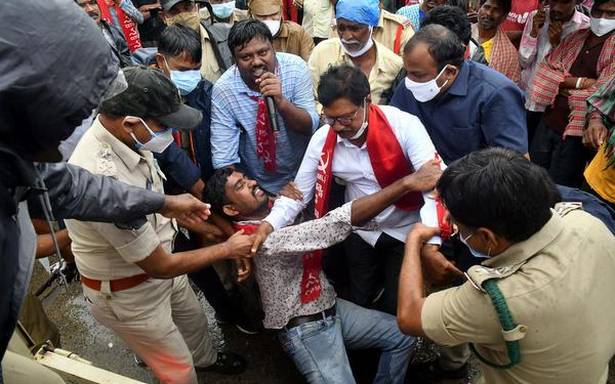 Braving intermittent rain, scores of activists of the Congress, the CPI (M), the CPI, the CPI (ML-New Democracy) and various other Opposition parties staged protest demonstrations in Khammam town and elsewhere in the district on Monday in response to the Bharat Bandh called by the Samyukt Kisan Morcha (SKM) demanding scrapping of the Centre’s three farm laws.

Normal life was paralysed in the district as TSRTC buses stayed off the roads, shops downed their shutters and most of the educational institutions remained closed during the dawn-to-dusk nation-wide bandh. Undeterred by inclement weather, people from various walks of life came out on the streets in Khammam and other parts of the district expressing solidarity with the more-than-10-month-old farmers’ ongoing agitation at the national level against the Centre’s three agricultural laws.

Members of a host of unions and mass organisations representing farmers, labourers took part in the protest organised by the Left parties in front of the new bus stand in the district headquarters town on Monday morning.

Senior leaders of the CPI (M), the Congress, the CPI and the CPI (ML-New Democracy), the Telangana Rythu Sangham, the CITU, the DYFI, the PYL and a clutch of other mass organisations led the protest demonstrations in the town.

Hordes of demonstrators staged protests on different stretches of the Suryapet-Khammam-Aswaraopet section of the National Highway 365BB pledging their unstinted support to the relentless agitation by farmers demanding repeal of the three farm laws. Several demonstrators were detained by the police when they tried to block the movement of buses in front of the new bus stand on the bypass road on Monday morning. They were let off in the afternoon.

In Bhadradri-Kothagudem district, members of various farmers’ organisations and trade unions took to the streets in Kothagudem, Manuguru and other towns in the coal belt region in support of the Bharat Bandh. The joint forum of employees, teachers, pensioners and contract staff extended their support to Bharat Bandh.

In a statement, the CPI (M) Khammam district secretary Nunna Nageswara Rao said all sections of people extended their full support to Bharat Bandh and made it a success in the district. People of the district expressed their outright opposition to the “black” agricultural laws, and also their resentment against the “anti-people” and “pro-corporate” policies of the persons at the helm and price rise, he said.

He alleged that the TRS was “hand in glove” with the BJP and extending support to the “anti-farmer” policies of the BJP regime at the Centre.