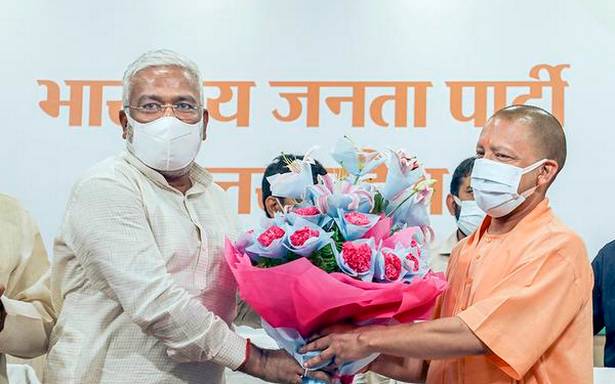 The ruling BJP in Uttar Pradesh on Saturday claimed victory in 635 out of 825 block pramukh posts in the State even as the opposition Samajwadi Party (SP) accused the State government of misusing its administrative machinery to “forcefully capture” the posts in the high-intensity elections.

Meanwhile, the voting and nomination for the polls were marred by scuffles, clashes and firing in some districts, including Etawah where an officer of the rank of Superintendent of Police, City, was allegedly slapped while trying to prevent a crowd of BJP supporters from breaching the barricade near a polling booth.

Continuing to dominate the local body polls, the BJP, along with the Apna Dal, had recently claimed victory in 67 out of 75 zilla panchayat chairperson seats.

Prime Minister Narendra Modi congratulated his party workers and Mr. Adityanath for the victory. “The benefits that the public got from the Yogi Adityanath government’s politics and schemes for public welfare have been reflected in the party’s massive victory,” Mr. Modi said.

Mr. Adityanath, in turn, said the victory was a result of the faith of the people in Mr. Modi’s “mantra of Sabka Saath, Sabka Vikas, Sabka Vishwas”.

The State police said incidents of clashes, sloganeering and scuffles were reported in 17 districts.

In Etawah, SP City Prashant Kumar Prasad was heard on camera saying that he had been slapped by someone in a crowd after police tried to prevent BJP supporters from breaking a barricade near a polling station in Barhpura block.

The officer, while talking to his superior on a phone in the middle of the fracas, also said that BJP supporters had attacked police with lathis and even brought bombs.

SSP Etawah Brijesh Kumar Singh said voting was on smoothly at the block when the crowd, which was kept 500 metres away, reached a barrier 200 metres close to the voting centre. When stopped, the crowd fired shots and pelted stones, following which police dispersed them, said the officer.

The SSP said seven cartridges were found on the spot and that police did not fire any shots. Action would be taken and photographs of those involved were being scanned, the officer said.

In Unnao, a TV journalist Krishna Tiwari said he was slapped, manhandled and shoved around by a CDO while he covering the voting.

He alleged he was beaten up by an IAS officer Divyanshu Patel and supporters of the ruling party even as his camera was on. The entire incident was captured on video and widely shared on social media.

SP president Akhilesh Yadav alleged that the BJP used its power to get votes in its favour, and that block pramukh candidates and kshetra panchayat members were openly kidnapped in the State.

“The BJP has held democracy hostage in UP,” said Mr. Yadav in a statement issued by party spokesperson Rajendra Chaudhary.