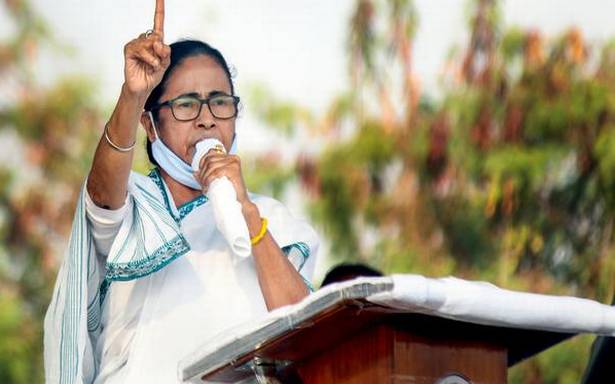 She accuses Prime Minister of spreading lies about West Bengal

West Bengal Chief Minister Mamata Banerjee on Tuesday branded the BJP as an “outsider party”. She said “the BJP is not Bengal party, it’s a party from Gujarat”.

Addressing a public rally at Behrampore in Murshidabad district, she said that “people of Bengal will rule the State”.

The Trinamool Congress leadership has been targeting the BJP by calling leaders, including those from Delhi, as “outsiders”.

Ms. Banerjee accused Prime Minister Narendra Modi of spreading lies about West Bengal. “Have you ever heard of prime ministers lying? … the Prime Minister is saying that government workers [in West Bengal] are not getting their salaries. What kind of nonsense is this? Which government worker has not received salary, show us Modi babu. And you have been selling VSNL, SAIL, coal and LIC and privatising railways,” she said.

Ms Banerjee made repeated references to Mir Jafar, the military general of Nawab Siraj ud-Daullah who sided with the British in the Battle of Plassey in 1757. “Do not forgive ‘Mir Jafars’, the traitors who have joined BJP,” she said, adding that Murshidabad would play a crucial role in the Assembly polls.

“Till I live, I will live like a Royal Bengal Tiger,” she stated. She asserted that she would not allow the National Register of Citizens in the State. She accused the Centre of not disbursing funds through PM Kisan Samman Nidhi even though her government had sent the names of 2.5 lakh farmers. The BJP had claimed that the Trinamool Congress had denied benefits of PM Kisan to about 70 lakh State farmers.

‘Will continue to support farmers’

Earlier in the day, the Chief Minister held a public rally at Kalna in Bardhaman, and reiterated her stand against the controversial three Central farm Bills. Until they were withdrawn, she would continue to extend support to the agitating farmers. “See what is happening to Modi babu’s farmers in Haryana, Punjab, Delhi, Uttar Pradesh. Barbed wires and nails are being used to keep people out. Those three black bills will loot everything from the farmers… You [the farmers] will produce the crops and they will sell it to the Adanis,” she alleged.