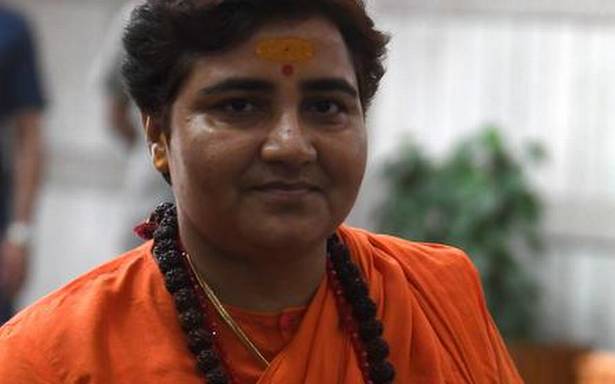 She alleged that the Congress has always abused patriots.

BJP MP from Bhopal Pragya Singh Thakur has ended up alluding to Mahatma Gandhis assassin Nathuram Godse as a "patriot while attacking the Congress.

Ms. Thakur, an accused in the the 2008 Malegaon blast case, on Tuesday evening alleged that the Congress has always abused patriots.

Her comment came in the wake of Congress leader Digvijaya Singh’s remark terming Godse as the "first terrorist".

“The Congress has always abused patriots…termed them as ‘saffron terrorists’. Nothing is more vile than this and I don’t want to say anything more on the issue,” Ms. Thakur told reporters in Ujjain when asked about Mr. Singh’s remark on Godse.

In May 2019, during the Lok Sabha polls, Ms. Thakur had kicked up a huge row by calling Godse a patriot, but apologised for it later and withdrew the statement.

In November 2019, the BJP MP had tendered an apology in the Lok Sabha for making controversial comments on Godse in the Lower House of Parliament.

Last Sunday, the Hindu Mahasabha opened a study centre named after Godse in Gwalior, but closed it two days later following an intervention by the district administration.

Ms. Thakur praised the BJP government in Madhya Pradesh for dealing strictly with stone-pelters who targetted rallies taken out for creating awareness about the upcoming Ram temple in Ayodhya.