‘The message the BJP is sending is that they are in no way responsible for Uddhav’s downfall and it was only Shinde who is to be blamed.’
Syed Firdaus Ashraf/Rediff.com reports.

Uddhav Thackeray’s emotional appeal to Shiv Sena cadres after his resignation as Maharashtra chief minister turned the tables on the Bharatiya Janata Party, forcing it to consider keeping a safe distance from power before the exigencies of realpolitik kicked in.

BJP leaders initially felt that Uddhav’s departure from the chief minister’s official residence Varsha on the night of June 22, 2022 created a sympathy wave for the Shiv Sena president, and they were not inclined to take the blame for his exit.

‘Remember, you are pulling down Balasaheb Thackeray’s son from the chief minister’s post,’ Uddhav had said in his virtual address on Wednesday, June 29, 2022, night before submitting his resignation to the governor later that night.

Uddhav had also questioned Governor Bhagat Singh Koshyari’s decision to call for a trust vote in the Maharashtra assembly soon after BJP leader Devendra Fadnavis called on him on Tuesday, June 28, evening whereas Koshyari — a former BJP chief minister of Uttarakhand — did not find time to appoint 12 members of the state legislative council which list had been pending with him for more than a year. 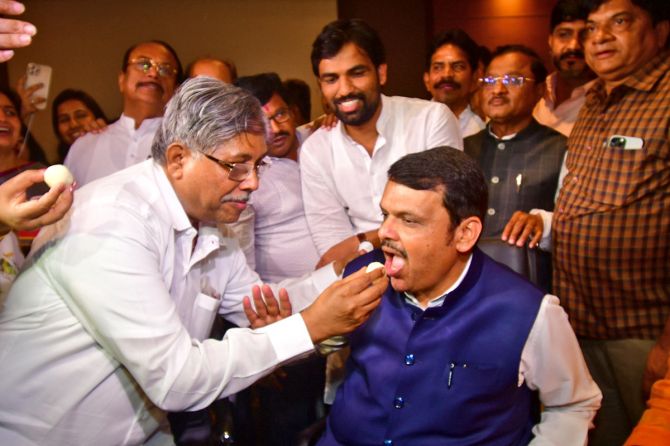 Even as Uddhav was at Raj Bhavan to submit his resignation as chief minister, television visuals showed BJP leaders including Fadnavis distributing sweets and congratulating each other, which did not go down well with many Maharashtrian voters.

It is true that Uddhav had stolen the people’s mandate to dislodge Fadnvais as chief minister by joining hands with the Congress and Nationalist Congress Party in November 2019 to form the Maha Vikas Aghadi government.

By doing so, he appeared to have abandoned the Sena’s core Hindutva ideology by joining hands with ‘secular’ parties like the Congress and NCP. But that was then.

As then British prime minister Harold Wilson once noted, a week is a long time in politics.

After Uddhav’s resignation, social media was full of praise for Uddhav on how efficiently he had tackled the pandemic and how graceful he was in his exit, making the BJP realise that public sentiment was firmly with Thackeray.

Fadnavis’s reluctant decision to not accept the chief minister’s post is a result of this view in the BJP leadership which does not want the poarty to be seen as a power-grabber by Maharashtrian voters.

Moreover, the Supreme Court is expected to announce its verdict on the expulsion of 16 rebel Shiv Sena MLAs on July 12.

The Shiv Sena had petitioned the apex court, seeking disqualification of 16 out of the 39 rebel MLAs for anti-party activities.

If those MLAs are disqualified, then the BJP would be in a tight spot in the Maharashtra assembly. “There is some gehri chaal (deep game) from the BJP’s side going on which is difficult to read at this moment because no one was expecting Shinde to be made the CM,” a close aide of Uddhav Thackeray tells Rediff.com.

“The message that the BJP is sending is that they are in no way responsible for Uddhav’s downfall and it was only Shinde who is to be blamed,” he adds.

The BJP’s national leadership is wary about Shinde to whom he is an unknown quantity. He is, after all, a Shiv Sainik of some vintage who always proclaims his devotion for Shiv Sena founder Balasaheb Thackeray. Could such a man be trusted with an alliance with the BJP?

Fadnavis — for whom being deputy chief minister must surely seem a demotion after being chief minister for five years — has had to accept the diminishing of his position in the interest of realpolitik, but will no doubt keep a careful watch on Shinde. Early on in the rebellion, Uddhav had appealed to Shinde to come back to the party fold and accept the chief minister’s post if that is what he wanted, but the rebel leader declined, stating that his only condition was that the Shiv Sena must join hands with the BJP.

Shinde seems well ensconced in the BJP ecosystem even without formally joining it.

The first litmus test for the BJP and Shinde’s Shiv Sena faction will be the coming elections to the cash-rich BrihanMumbai Municipal Corporation which has been controlled by the Shiv Sena for more than two decades.

The BMC has fixed deposit reserves of Rs 82,410 crore (Rs 824. 10 billion) and is a cash cow for the Shiv Sena, which the BJP hopes to dislodge in the elections which are likely to be held in September.

In the 2012 BMC election, the Sena had contested 135 seats in alliance with the BJP and won 75 seats, whereas the BJP contested 67 seats and won 31 seats.

In the 2017 election after the Shiv Sena and BJP parted ways, the former won 84 seats and the latter 82 seats.

In spite of its best efforts, the BJP has been unable to lure hard core Shiv Sena voters to its side.

The BJP believes it is here that Shinde will come in handy.

By making Shinde CM, the BJP has put Uddhav in a spot as he had announced that he would welcome it if the BJP made a Shiv Sainik CM.

Now since a Shiv Sainik has become CM, Uddhav cannot tell his party workers that his government’s fall was orchestrated by central government agencies like the ED, IT and CBI.

Shinde’s Sena combined with the BJP’s seemingly limitless resources will be in a much powerful position than Uddhav’s Sena which has just been handed a humilitating defeat.

Still, the BJP knows that while a majority of Shiv Sena MLAs are with Shinde, most party cadres are with the Thackeray family.

The BJP is now hoping that Chief Minister Shinde will be break through the hard core Shiv Sena voter’s reluctance and get them into his fold, thus helping them indirectly in the 2024 (or earlier) assembly elections for which the BJP and Shinde Sena are apparently targeting 175 seats.