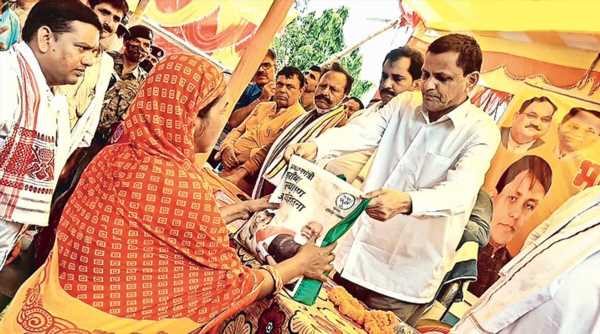 Under the PM-GKAY scheme, every ration card holder will be given 5 kg rice/wheat for free per month till November due to the Covid-19 crisis. The BJP has incurred the ire of the Opposition in Bihar after leaders of the saffron party distributed ration to beneficiaries of the PM Garib Kalyan Anna Yojana (PM-GKAY). According to Opposition leaders, this was tantamount to using a government scheme to further the BJP’s interest.

Under the PM-GKAY scheme, every ration card holder will be given 5 kg rice/wheat for free per month till November due to the Covid-19 crisis.

Bihar has 1.6 crore ration card holders, and BJP leaders from the state have been distributing the ration to the beneficiaries in sacks which have Prime Minister Narendra Modi’s photo printed on them. Top BJP leaders, including Rajya Sabha MP Sushil Kumar Modi, Union minister Nityanand Rai and Bihar Health Minister Mangal Pandey were recently seen distributing sacks of ration.

RJD spokesperson Mrityunjay Tewari told The Indian Express, “How can BJP misuse a government platform? It is a blatant use of a government scheme to further the interest of the party. The BJP is giving the impression that ration card holders are also getting free grain along with free sacks.”

Tewari added RJD workers would create awareness among people about BJP trying to take “undue advantage” from a government scheme.

Senior Congress leader and MLC Prem Chandra Mishra said, “It is unfair and bad to showcase a government scheme like a BJP scheme. But then, anything is possible under the present dispensation. We, as the Opposition, can only raise our voice against it.”

BJP spokesperson Guru Prakash Paswan however dismissed the allegations. He said, “PM-GKAY is a revolutionary scheme that has ensured ration for more than 80 crores people from across the country… The unnecessary controversy by a section of the Opposition is nothing but a failed attempt to dilute the relevance of this scheme.”