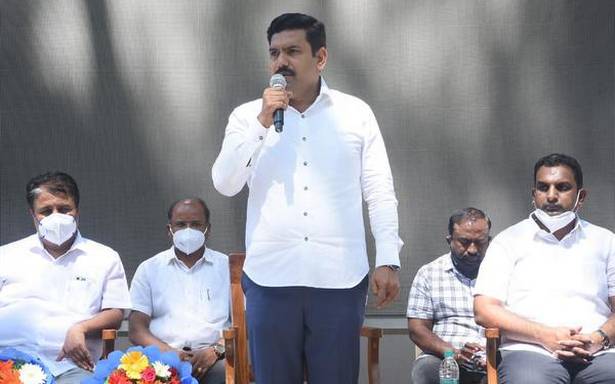 Party’s State Vice President B.Y. Vijayendra said there is no need to attach any political significance to visits by BJP MLAs or Ministers to New Delhi

BJP State Vice President B.Y. Vijayendra on Wednesday sought to make it clear that the party’s central leadership has ruled out any change of leadership in Karnataka till the end of the term of the current Assembly.

He told reporters in Mysuru that BJP’s National General Secretary Arun Singh, who is in charge of Karnataka, had praised the administration of Chief Minister B.S. Yediyurappa while making it clear that he will continue at the helm for the remaining two years of the term of the Assembly.

He replied in the affirmative when asked if the campaign for change of leadership was a closed chapter.

Mr. Vijayendra, who is Mr. Yediyurappa’s son, said there is no need to attach any political significance to visits by BJP MLAs or Ministers to New Delhi. “There is no bar on anybody visiting the national capital. They may have even gone for personal reasons. So, there is no need to lend a political colour to the visits,” he said.

Apart from Mr. Arun Singh, the BJP’s State President Nalin Kumar Kateel had insisted that there will be no change of leadership in Karnataka.

When his attention was drawn to the Congress party’s allegation that the BJP government was neither administering the State properly nor controlling COVID-19, Mr. Vijayendra referred to the developments in the State Congress during the last 10 days and said it was ‘laughable’ that leaders in the opposition party were squabbling over who would be the next Chief Minister.

Mr. Vijayendra said he would be meeting party workers in Varuna Assembly constituency as well as other parts of Mysuru. He said that a decision on him contesting the next Assembly elections and the constituency from where he will contest will be taken only after two years.

He spoke to reporters after participating in a programme organised to distribute ration kits to workers of Mysuru zoo who had been hit by COVID-19.