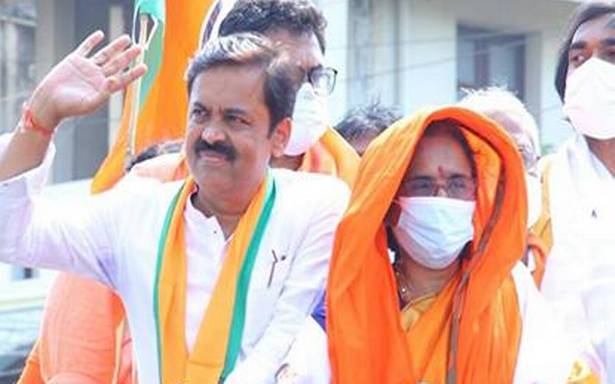 BJP-Jana Sena Party combine nominee for the Tirupati Lok Sabha bypoll K. Ratna Prabha has said that she would develop the constituency with more vigour, if elected.

Speaking after filing her nominations for the by-election slated for April 17 before Nellore Collector and Returning Officer K.V.N.Chakradhar Babu on Monday, the bureacrat-turned-politician promised to develp the constituency further with the Central funds. She alleged that the YSRCP MPs had miserably failed in articulating the issues relating to development of their respective constituencies in Parliament.

BJP MP G.V.L.Narasimha Rao, who accompanied Ms. Ratna Prabha, said the Centre had sanctioned many higher education institutions to Tirupati, including the IIT and IISER and three electronic manufacturing clusters.

“Andhra Pradesh is the only State to get five industrial nodes and of them, three are located in Tirupati Parliamentary constituency. The Tirupati airport would soon attract international traffic. Nellore and Tirupati railway stations are being developed into smart stations,” he said, adding that Tirupati would get more Central funds under the Atal Mission for Rejuvenation and Urban Transformation and Smart Cities (AMRUT) mission.

Describing Ms. Ratna Prabha as a ‘career bureaucrat’ with a vast experience, Mr. Narasimha Rao said Dr. M.Gurumoorthy, the YSRCP candidate, had been rewarded with the ticket for his ‘loyalty and services’ to Chief Minister Y.S. Jagan Mohan Reddy.

“Having failed as an opposition party, the TDP is on the verge of extinction and the Congress is out of reckoning. The question before the people of Tirupati now is development versus no development,” said BJP MP C.M. Ramesh.