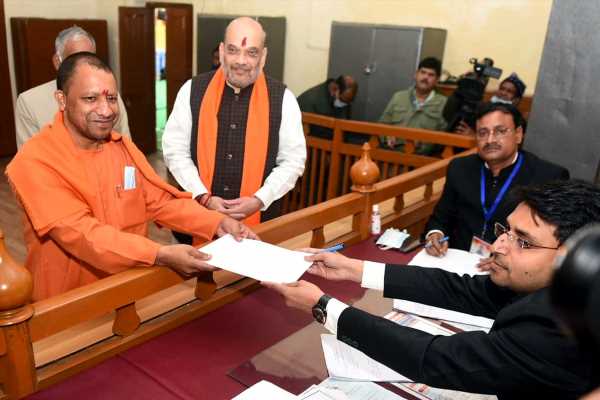 ‘Since 2017, the chief minister and the RSS seem to have come closer.’
‘This relationship’s warmth is more from the RSS’s side.’

Shashank Chaturvedi, who teaches at the Centre for Development Practice and Research, Tata Institute of Social Sciences, in an interview with Aditi Phadnis/Business Standard, discusses the importance — and complexities — of Gorakhpur and the math to which Uttar Pradesh Chief Minister Yogi Adityanath belongs.

Yogi Adityanath will contest the assembly election from Gorakhpur. The outcome is a foregone conclusion. But what do you think impelled him and the Bharatiya Janata Party to field him from there? Could the shock defeat of the BJP in the 2018 by-election be a factor?

There is a background to Yogi Adityanath contesting from Gorakhpur.

Prime Minister Narendra Modi and the BJP had started campaigning in eastern UP in November last year. Realising early on that inflation, caste dynamics, and the farmers’s movement would be critical factors in this election, the top BJP leadership began preparations for the elections and was in an advantageous position compared to the Samajwadi Party, Bahujan Samaj Party, and Congress.

However, by mid-December the BJP realised that Akhilesh Yadav (of the SP) had stirred the ground through his Vijay Rath Yatra and unsettled the poll preparedness of the BJP.

While doing fieldwork in eastern UP for the past four months, I noticed the palpable change in favour of Akhilesh. He emerged as a frontrunner for the disgruntled voters.

If this was not enough, two cabinet ministers from the Yogi government — Swami Prasad Maurya and Dara Singh Chauhan — both from eastern UP, resigned from the BJP and joined the SP. The BJP has fielded Yogi from Gorakhpur to undo the damage in this region.

By my reckoning, till November the BJP considered fielding him from Mathura because of his image as a nayak/doer among youths in western UP and to consolidate Jat voters against Muslims. Akhilesh’s political moves spoiled this calculated strategy.

Could you describe the political economy of Gorakhpur?

It has gradually transformed in the past three decades, gathering a new momentum after 2017.

The CM city, as it is called in local media, is on the same track that any neo-liberal economy expects it to be. With a thriving mall culture, big stores, and branded showrooms, real estate has boomed and is controlled by local politicians and big businessmen.

Huge tracts of land in the city are under the math‘s control. In addition, the business class, primarily migrant Sindhi/Marwaris, controls the big business and is a traditionally core supporter of the politics of the math.

The mafia-controlled local business model is passé, and a new crop of contractors aiming to become politicians has emerged in the past two decades.

Sugar mills have revived recently, and the local farmers may have got a new lease of life in the region. Further studies are needed to understand more on this.

The BJP and Yogi Adityanath have not always had good relations. In this context, where does the chief minister stand in the BJP’s power hierarchy?

The BJP and he never had good relations. One needs to go into the tension between the Rasthtriya Swayamsevak Sangh and Hindu Mahasabha to understand the genealogy of this tension.

The previous two mahants — Digvijaynath and Awaidyanath — were not part of the Jana Sangh/BJP’s political scheme in Gorakhpur. It was with the Ram Janambhoomi andolan that the math inched closer to the BJP, but certainly not to the RSS.

In the recent past, especially since 2017, the chief minister and the RSS seem to have come closer.

One needs to understand that this relationship’s warmth is more from the RSS’s side. In other words, the RSS, in its fourth phase of evolution since 2017 — the earlier three were 1925-1948, 1951-1980s, and 1990s-2014 — has realised the political representation of its thought in Parliament and assemblies like never before.

In addition, the RSS is historically known for its commitment to the Hindu cause and can go to any lengths to back any individual who can further its cause.

Yogi Adityanath as an MP from Gorakhpur maintained a distance from the RSS and ran his show through the Hindu Yuva Vahini. With the return of Modi to power in 2019, his brand of politics appears to have enriched the ideological content of Hindu nationalism.

The RSS has thus welcomed him, and my reading is that it will continue for a considerable time in the future.

Interestingly, this phase of development of the RSS talks about ideas of Hindu nationalism, but there is less emphasis on texts produced by the organisations and its ideologues.

By giving the nod to him, the RSS has moved away from its initial position of ‘doing’ Hindu nationalism and has realised the limitations of its initial version of politics and the potential of Adityanath’s brand of politics.

Thus, I will say his rise within the RSS schema is due to a convergence of the ideological content of the diverse proponents of the politics of Hindu nationalism.