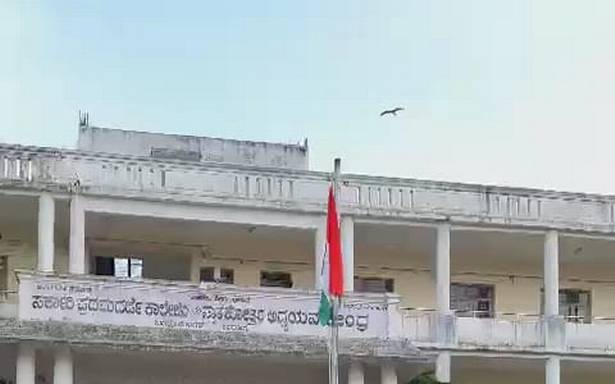 Members of Shivamogga district unit of National Students Union of India (NSUI), a students’ wing of the Congress party, hoisted the national flag on Government First Grade College campus at Bapuji Nagar in Shivamogga on February 9 morning. This is the place where a student had hoisted the saffron flag during a protest against hijab on February 8.

A group of NSUI activists, led by district president Vijay Kumar and State secretary H.S. Balaji, went to the spot with the tricolour. One of them climbed up the flag post to tie the flag. Later, they sang the national anthem.

The State Government has declared a holiday for colleges for three days starting February 9 as protests against the hijab turned violent in many places, including Shivamogga, on February 8.

NSUI members said the controversy over hijab was created for political reasons. The students should give up the issue and return to classes.