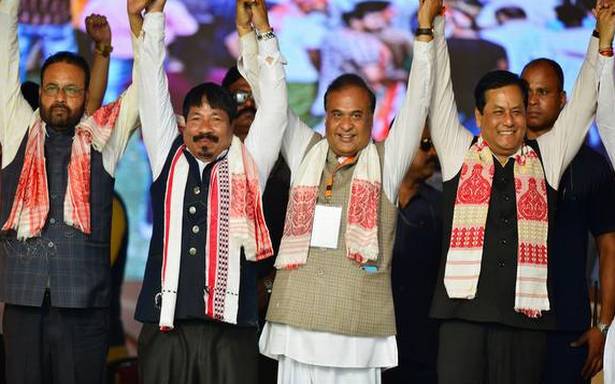 Ruling alliance was leading in 78 seats of the 120 seats for which trends were available by 1 p.m.

The Bharatiya Janata Party (BJP) and its regional allies are set to retain power in Assam, overcoming the challenge of a combined opposition led by Congress.

The BJP and its allies — Asom Gana Parishad and United People’s Party Liberal — were leading in 78 of the 120 Assembly seats for which trends were available by 1 p.m. The BJP was leading in 60 seats, exactly the number of seats it had won in 2016.

The Congress-led 10-party ‘Mahajot’ was leading in 41 while jailed activist Akhil Gogoi was the only candidate of a regional front who was leading. The front comprised his Raijor Dal and Assam Jatiya Parishad, both born out of the movement against the Citizenship (Amendment) Act (CAA).

The BJP and the AGP did expectedly well in eastern, northern and parts of central Assam to take a comfortable lead. Sops for tea plantation workers, who dictate terms in 45 constituencies in these regions, appeared to have worked for the saffron camp.

Another factor was the polarisation of voters primarily because of the Congress joining hands with the All India United Democratic Front (AIUDF). The BJP-AGP camp had used AIUDF president and MP Badruddin Ajmal as the “future of Assam” if ‘Mahajot’ wins Mandate 2021.

The trends indicate issues such as the National Register of Citizens and the CAA did not have much of an impact.