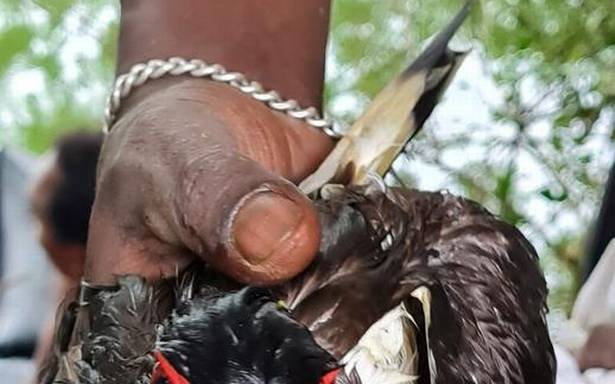 A young lapwing, which was tangled in a Chinese manja thread used to fly kites at a small pond in a wooded area in Anekal on the outskirts of the city, was rescued on Sunday.

Niranjan, a wildlife rescue volunteer who rescued the bird, said he was alerted about a bird trapped on the surface of a pond on Saturday night. “We went there but couldn’t see anything in the dark. So we returned on Sunday morning with a rubber dinghy and a team from the Forest Department. The bird had been tangled up in a Chinese manja and was struggling to keep itself afloat,” he said.

The bird, a young one, appeared tired from having flapped its wings for several hours to untangle itself unsuccessfully. The bird was shifted to an animal rescue centre at Bannerghatta, where it is being treated.

Activist Arun Prasad, who got the tip-off about the bird, said despite a ban on the use of manja thread, its use has gone on unchecked in the city. “The government has to ensure it is not imported and used here. It is not enough to just impose a ban,” he said.