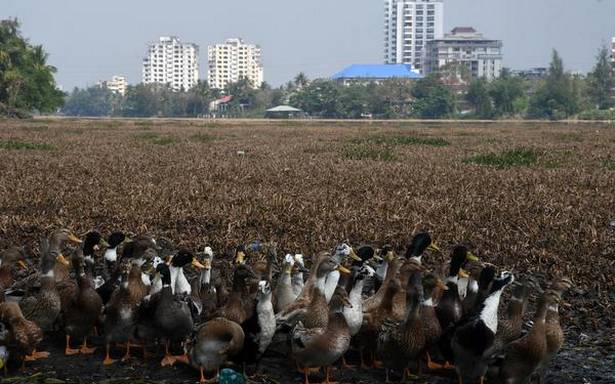 He was speaking at a review meeting at the District Collectorate in Alappuzha.

According to officials, a multidisciplinary team will visit the areas affected by the avian influenza (H5N8) in Alappuzha and Kottayam districts and take stock of the situation.

The Minister said birds, including domestic birds, would be culled within a 1-km radius of the infected areas. He directed the officials to complete the culling process and sanitise the areas by Thursday.

Social Forestry officials have been asked to monitor the migratory birds.

Once the culling and sanitation drive was completed, the Animal Husbandry Department would carry out surveillance activities over a radius of up to 10 km from the hotspots for one week, Mr. Raju said.

Regarding the compensation to farmers, the Minister said the amount would be transferred to the bank accounts of the beneficiaries.

District Animal Husbandry Officer P.K. Santhosh Kumar said the culling operations were nearing completion in the district. “Culling of birds is almost over except in one place at Karuvatta. The process will be completed by Thursday,” he said.

Meanwhile, sources said that fresh bird deaths had been reported from a few places in the district. “The cause of deaths has not yet been ascertained. Samples have been sent for testing and results are awaited,” said an official.

The Health Department has also increased surveillance in the district in view of the outbreak.

bird flu has been detected from four places in Kuttanad at Nedumudi, Thakazhi, Pallippad and Karuvatta in Alappuzha district. Earlier, authorities collected samples from six places in the district following the mass death of ducks in December and sent it to the National Institute of High-Security Animal Diseases (NIHSAD), Bhopal, for analysis. Four samples tested positive for bird flu.