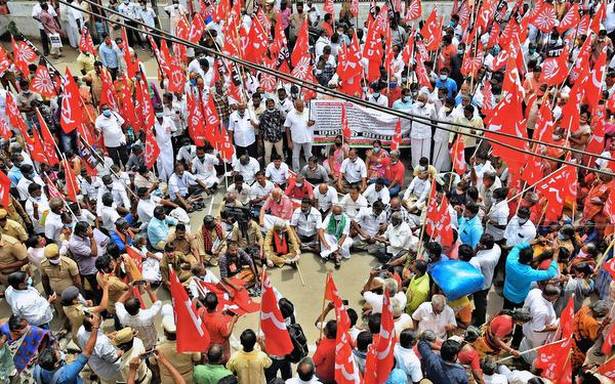 Commercial establishments functioned as usual and normal life remained unaffected across the districts on Monday even as opposition parties held demonstrations in support of the Bharat Bandh called by farmers’ union against the Centre’s three farm laws. No untoward incidents reported in the districts.

In Salem, the protests were held at three places within the city and over 12 places in Salem rural areas. Cadres of various political parties staged road roko at major junctions. Members of the Makkal Needhi Maiyam and a few other trade unions protested in front of the Salem Collectorate.

District secretary of Communist Party of India A. Mohan staged a road roko at Kondalampatti roundabout disrupting vehicles movement. They raised slogans condemning the Union government for passing the three farm laws. The protesters also condemned the Centre for its monetisation plan, hike in fuel and LPG prices and for introducing four labour codes.

In Namakkal, protesters staged rail roko agitations at Pallipalayam, Veppadai and Namakkal. However, according to officials, train services were not affected.

In Erode, Opposition parties staged a protest in front of the Erode railway junction and at 12 other places. In Dharmapuri the demonstrations were held at over 10 places. However, normal life was not affected.