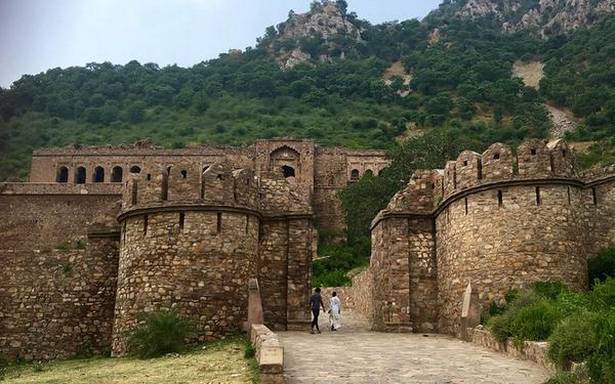 As we drove up to the fort of Bhangarh in Alwar district of Rajasthan, from the Sariska Tiger Reserve, we passed by the Ajabgarh fort. Since entry into Bhangarh is restricted after sunset, we were in a hurry. I didn’t climb up the Ajabgarh fort, but I explored its base. A local lad grazing sheep told me that there was nothing that I would be able to see from below except the four walls. If I had known its significance in the destiny of the fort I was going to, I would have made more of an effort.

The drive to Bhangarh fort was eerie. We passed through a village that was ostensibly inhabited. The main road was lined with the ruins of once-beautiful havelis. Children were seated in front of intricately carved wooden doors that had large rusted locks.

The Bhangarh fort was built by the Kachwaha ruler of Amber, Raja Bhagwant Singh, for his younger son Madho Singh in 1573 AD. Madho Singh’s brother was the celebrated Man Singh, who was Akbar’s general. Madho Singh was succeeded by his son Chatr Singh. It was Chatr Singh’s son Ajab Singh who built the fort of Ajabgarh.

Though it was midday, it seemed quite lonely, and a long walk, so we hired a local guide. Guides after all tell the most colourful tales and sensational gossip!

The guide told us of the beautiful princess Ratnavati, who was the daughter of Chatr Singh. She was the jewel of Rajasthan. Ratnavati was much younger than her stepbrother Ajab Singh, and was as universally liked as he was disliked. Tales of her beauty and delightful temperament spread far and wide and she received many marriage proposals. A tantrik priest, who was well versed in black magic, fell in love with her. But knowing that he didn’t stand a chance with the beautiful princess, he tried to cast a spell on her. Seeing the princess’ maid buying perfume for her in the village, he cast a spell on it so that Ratnavati would fall in love with him. Ratnavati came to know of this and threw the bottle. It turned into a boulder and hit the tantrik. He was crushed under its weight, but before he died, he cursed the princess, her family, and the entire village. The next year, a battle was fought between the forces of Bhangarh and Ajabgarh, which led to the death of Ratnavati and most of the army.

The guide solemnly told us that it was due to this curse that no one in the village or fort could be reborn; it is forever condemned to desolation and is inhabited by ghosts. If any villager tries to build a roof, it apparently mysteriously collapses.

We were told another story too. Apparently there was a sadhu, Guru Balu Nath, living on top of the hill on which Raja Bhagwant Singh built the fort. His only condition for letting the fort be built there was that it should never cast a shadow on his dwelling. This condition was honoured by all except Ajab Singh, who added columns to the fort that cast a shadow on the ascetic’s house. The angry sadhu’s curse led to the ruin of the fort and the surrounding villages. A small stone hut, known as tantrik ki chatri, overlooks the fort.

The truth seems to be that after Chatr Singh’s death, since Ajab Singh had already established a new fort, the population of the area dwindled. A famine in 1783 forced the remaining villagers to seek new avenues. In 1720, Raja Jai Singh, grandson of Man Singh, attached Bhangarh to his estate.

By the time we were regaled with these stories, we had walked through a long road lined on both sides with ruins. These were the jauhri bazaars, houses of dancing girls (Nachni ki Haveli), the guide said. There were also some magnificent banyan trees. We entered the impressive gateway to see the fort. Even though the fort was in ruins, it had three grand storeys to be explored. The Someshwara temple at the side, with its beautiful stepwell, was serene. We paid our respects there before climbing up to the fort. The steps and the top of the fort are littered with broken columns, stones, and a forlorn-looking carved niche, which perhaps held Ratnavati’s toilette. The walls inside the temple are intact.

Entry into Bhangarh is prohibited between sunset and sunrise. It is ranked the most haunted fort in India. However, the local guards denied having ever seen any paranormal activity there.

I don’t know if the fort is haunted, but it truly deserves the title of hauntingly beautiful.