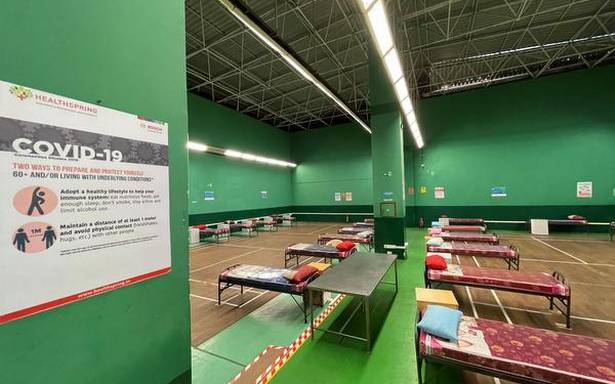 The doctors were in charge of war rooms in two zones

The arrests come a day after BJP legislators, led by Bengaluru South MP Tejasvi Surya, live-streamed an exposé of alleged corruption in bed allocation by staff at the South zone war room. One of the arrested accused, Dr. Rehan, is in charge of the South zone war room, while the other, Dr. Suresh, is the Bommanahalli war room in-charge.

“We have taken Dr. Rehan into custody and are trying to ascertain the possible involvement of others in the racket. The second accused, Dr. Suresh, has tested positive for COVID-19, and we are yet to question him,” said a senior police official.

The duo allegedly instructed the third accused, a Bommanahalli war room staffer, Shashi Kumar, to block and unblock the beds using BU IDs. The police suspect that beds were being blocked in the name of asymptomatic patients in home isolation, only to be sold to others later.

CCB officials are checking records of the other war rooms in R.R. Nagar, Mahadevapura, Yelahanka and Dasarahalli as part of the investigation.

Private hospitals under the scanner

The CCB also suspects the involvement of many private hospitals. The day the BJP legislators exposed the scam, the Jayanagar police arrested a social worker, Nethravathi, and her nephew, Rohith Kumar, in a sting operation. They were allegedly selling blocked beds to desperate families for anywhere between ₹20,000 and ₹40,000, and are suspected to have contacts with war room staff and hospitals. The CCB has taken over the case as part of its probe into the bed allotment scam.

Sub-Inspector Chandan Kale, Jayanagar, who had initially probed the case, said the duo would get information about vacant beds across the city and get them blocked until they were sold. “The accused would then inform their contacts on the field, who approached people looking for beds for their loved ones. Once money exchanged hands, the beds were unblocked briefly to facilitate the admission of patients who had paid them,” said Mr. Kale.

Using this modus operandi, the accused sold a bed at Apollo Hospital in Jayanagar on May 1. According to police sources, the bed had been blocked in the name of Chandrasekhar, who was actually in home isolation. “Many touts, who are part of the racket, have switched off their phones and are on the run. Efforts are on to track them down,” a senior police officer said.

Home Minister Basavaraj Bommai, speaking to the media on the probe, said there was nothing communal in the investigation. “Anyone found guilty will be punished,” he said.

Lokayukta P. Vishwanath Shetty has taken suo motu cognizance of the alleged bed-blocking scam and ordered a parallel probe by the Lokayukta Police. He directed that a report be submitted to him in three weeks.

In his order, he said the Lokayukta probe will not limit itself to the South zone but will investigate bed allotment for COVID-19 patients in the entire city. He has directed the officials concerned to submit details of all beds allocated till date.