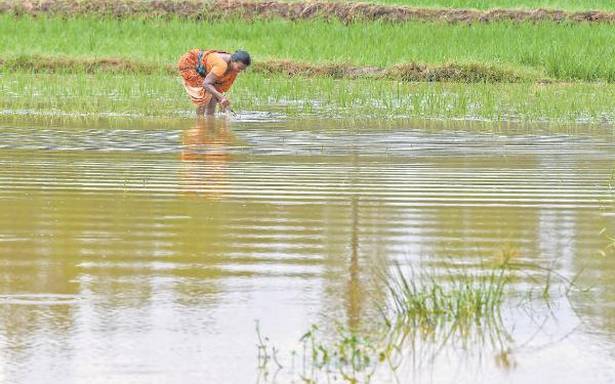 Farming has been at the receiving end of nature’s fury for many years and the recent Gulab cyclone left crops damaged in over 50,000 acres in the State. Prompt payment of compensation alone helps farmers tide over the crises, opine ryot leaders

Heavy rain and floods triggered by Cyclone Gulab have damaged standing crops in more than 1.56 lakh acres in six districts of the State.

In fact, the agriculture sector has been at the receiving end as drought, cyclones, unseasonal heavy rains and floods have unleashed a trail destruction in the State since 2014. Gulab joins the list of 50 natural calamities since Hudhud cyclone in October 2014 that have dealt crippling blows to the farming community. According to information, more than 62.36 lakh hectares of crop was damaged due to natural calamities since 2014 and more than 76.69 lakh farmers suffered losses.

The Agriculture department estimated a staggering loss of 55.07 lakh metric tonnes of food grains (production loss) during the last 84 months. The monetary loss as estimated by the officials is ₹14,675 crore, sources say.

The three North Andhra districts of Srikakulam, Vizianagaram and Visakhapatnam, and also the twin Godavari districts and Krishna bore the brunt of the Gulab cyclone. As per the preliminary estimates, crops in 52,313 hectares in 169 mandals were damaged and around 6,800 farmers suffered losses. The monetary loss would be around ₹267 crore. Paddy crop was the worst affected, followed by maize and other crops.

Farmers say the untimely rain will have an adverse impact on their paddy crop, which is nearing the harvest stage. According to K.V.V. Prasad, State general secretary, AP Ryotu Sangham, the loss will be much higher if the total cost of cultivation is taken into account. A farmer incurs not less than ₹54,900 per acre towards cost of cultivation, which includes tilling, sowing, fertilizer, harvesting and other expenses. On an average one acre yields 23 quintals of paddy that fetches ₹43,424. So, even if there are no natural calamities, a farmer incurs a loss of ₹11,467 per acre. If natural calamities occur, farmers don’t get back even the expenditure incurred, he says and urges the State government to compensate farmers for the losses.

The relief announced during 2014-15 has not been paid completely to the farmers who suffered due to heavy rains in West Godavari district. Payment of more than ₹2,400 crore relief has been pending since 2014-2019. Similarly, ₹13.97 crore is pending for the year 2020-21, farmer leaders claim.

The Agriculture Department officials, however, deny the allegations. They say that the government has been disbursing relief immediately after a calamity struck. "Chief Minister Y.S. Jagan Mohan Reddy is particular that relief should be paid on time to help farmers take up the next crop without any hassles. About 15 calamities, including heavy rain, floods and unseasonal rain have occurred since July 2019. Only in two instances the relief is pending," says an official, who didn’t want to be quoted.

Letters are being written seeking release of Central assistance to A.P. to enable it to provide relief to the affected farmers and restore damaged infrastructure. However, the State government without waiting for the Central aid to arrive has been releasing its funds immediately to rescue farmers. The State government has been providing input subsidy to all the affected farmers, the official adds.