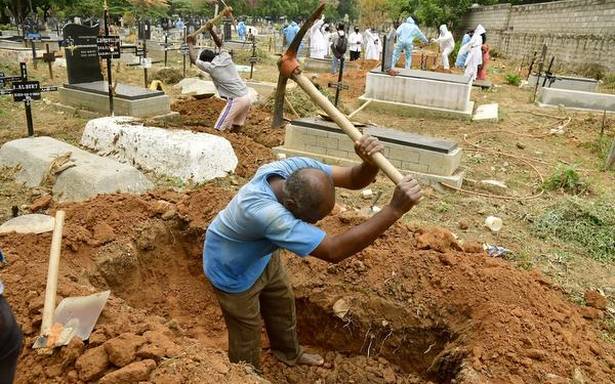 Chief Commissioner Gaurav Gupta claimed that many hospitals were releasing bodies for cremation or burial post-noon. “By the time ambulances and hearses reach the various graveyards and crematoria, it is 1 p.m. and there is a pile-up,” he said, and added that crematoria in the city have been directed to function from 8 a.m. to 8 p.m. He claimed to have inspected several facilities and found that from 8 a.m. to post-noon, there was hardly any rush.

“We have discussed this with private hospitals. We have requested them to release bodies earlier in the day to minimise rush at the various facilities,” he said.

Private Hospitals and Nursing Homes’ Association (PHANA), however, accused the civic body of delay in picking up bodies. PHANA president Prasanna H.M. told The Hindu that a majority of deaths happen during the early hours, between 4 a.m. and 6 a.m. As per the protocol, private medical establishments declare the deaths, inform relatives and the BBMP. “Even when we inform the BBMP at 8 a.m., the bodies are picked up post-noon. We often hear that ambulances or hearses are unavailable,” he said.