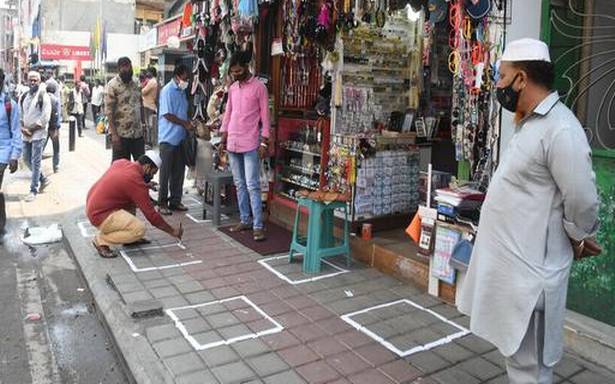 Traders in Bengaluru and other parts of Karnataka were taken by surprise when police started forcing them to close their establishments on Thursday.

“We don’t understand why there was so much confusion in the government on the guidelines it has issued,” said Mohammed Nazin, vice president, Bangalore Commercial Association.

A senior functionary of an industrial body vented his ire at the State government for poor communication. “When a huge advertisement on Namma Metro can be given in all papers on Thursday, why can’t the government issue an advertisement on the changes in guidelines? This shows the government in poor light. What we know is that they have not learned from the experience of the first lockdown,” he said.

A senior trader from Chickpet, Sajjan Raj Mehta, said the two-week lockdown, which they fear will be extended, will ruin businesses. “Traders are one community that has not received any help from the government, not even in the form of tax concessions. The trader community is already reeling under severe losses from last year, and several businesses had to close. Now this lockdown will only add to our problems,” he said. “Prime Minister Narendra Modi asked States to desist from lockdowns and here the BJP government does exactly the opposite.”

Mr. Nazin warned that given the precarious financial position of most small businesses, many will not be able to pay their employees causing much financial distress to more families.

‘Over-enthusiastic’ police under fire from industries

Meanwhile, contrary to government guidelines, police in their enthusiasm to shut down non-essential services, also hindered the working of industrial units. The Federation of Karnataka Chamber of Commerce and Industry (FKCCI) has complained to Chief Secretary P. Ravikumar that authorities have not allowed industrial activities in several districts even though permission has been given to operate by adhering to COVID-19 appropriate behaviour. The chamber president Perikal M. Sundar, in a letter on Thursday, requested the government to instruct deputy commissioners to desist from interfering with functioning of industries and to maintain operation of supply chains.

Head offices of several factories in the city were forcibly closed by the police, much against its own guidelines of allowing private offices with skeletal staff, sources said.