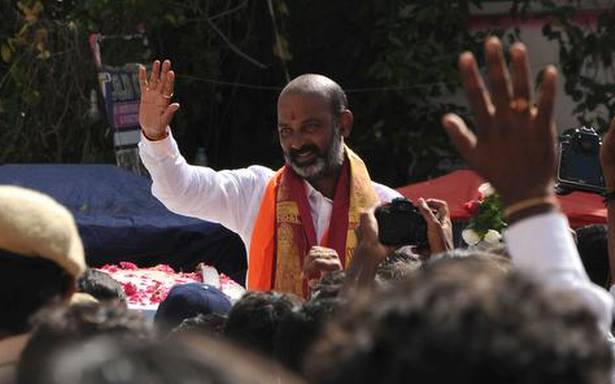 ‘People of Huzurabad constituency will quietly vote for BJP’

Telangana BJP president Bandi Sanjay Kumar has challenged Chief Minister K. Chandrasekhar Rao to resign if the TRS lost the Huzurabad Assembly byelection and warned that people of the constituency will quietly vote for the BJP.

“It will not be possible for anyone to stop the victory of BJP,” he said after formally launching the election campaign of the party at a workers’ meeting in Huzurabad on Sunday evening.

He alleged that the TRS was distributing ₹10,000 to every voter. But, the awareness levels among voters was high. They will accept whatever money was offered but use their judgement to vote for candidates who were on the side of justice. The TRS candidate will forfeit his deposit, he said.

Mr. Sanjay asked workers to visit every voter though they were offered ₹10,000. The BJP will contest the polls with a democratic spirit as in Dubbak Assembly and GHMC elections.

KCR had addressed a public meeting in the constituency last month after he understood that the people had made up their mind to vote for the BJP. He announced unconditional release of ₹10 lakh to beneficiaries of Dalit Bandhu but now the scheme was implemented with conditions.

The bank authorities froze the money deposited in the accounts of beneficiaries. The officials were at risk of losing jobs as they had no power to do so. Mr. Rao will shelve the scheme after elections, he added.

The government sent out false messages to the phones of beneficiaries that the money was released to their accounts and they were at liberty to spend on their chosen trades.