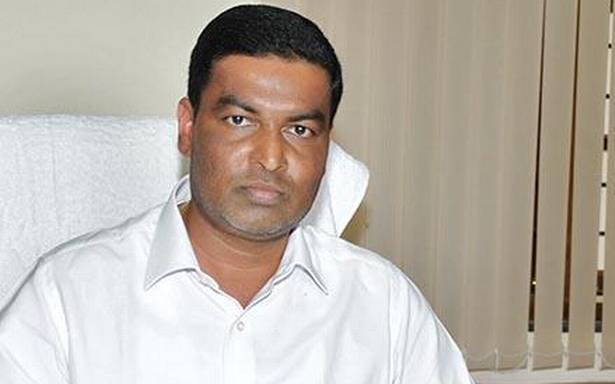 BJP MLA Balachandra Jarkiholi, who had stayed away from campaigning following the sexual harassment allegation against his brother and former Minister Ramesh Jarkiholi, has announced that he will campaign for the BJP candidate Mangala Angadi in the Lok Sabha byelections.

“I request all of you to work for the BJP candidate and ensure her victory,’’ he appealed to his followers and party leaders from Arabavi Assembly constituency that he represents.

He was speaking at a meeting of his supporters at Sri Basaveshwar Bhavan in Gokak. “We should all see that the Jarkiholi family’s vote bank remains intact. Our votes should not scatter and go to any other candidate. We should work sincerely with a single focus that the BJP nominee wins,” he said.

His elder brother Satish Jarkiholi is fighting the bypolls as a Congress nominee.

He assured his voters of Mr. Ramesh Jarkiholi joining the campaign for the BJP in a few days.

“He is not well. He is resting at home as he had contracted COVID-19. Once he is declared free from the virus, he will join our campaign efforts,’’ he said. He said that the BJP would organise two rallies in Gokak and Arabavi on Wednesday.

The Belagavi parliamentary seat is considered a strong base of the BJP. Suresh Angadi won successive elections here from 2004. “We should work hard to uphold this reputation,” he said.

He recalled that Suresh Angadi had got a lead of over 60,000 votes in Gokak and 55,000 votes in Arabavi. “We should see that Mangala Angadi gets even higher leads,” he said.

Union Minister Pralhad Joshi asked party workers to show the real strength of the BJP in Belagavi district. He asked them to highlight the good work done by Prime Minister Narendra Modi and Suresh Angadi in their campaign. He asked workers to go door to door during campaigning.

Earlier, at the Sambra airport, Mr. Balachandra Jarkiholi said that there was no clash among the brothers over their political leanings. “There is enough clarity in the family about such issues. We will campaign for our party, irrespective of the fact that our own brother is the Congress candidate,’’ he said.

He said that he would not react to controversial issues such as the CD incident or the allegations of corruption made by Vijayapura MLA Basanagouda Patil Yatnal against the Chief Minister. “We should avoid talking about such issues. Our present focus is the bypolls,” he said. “We have a team of lawyers working on the CD case. We have left it to them,” he said.

“I was preoccupied with other work for 15 days. That is why I could not campaign. Now I am here and we will sincerely work towards the victory of Mangala Angadi. If Chief Minister B.S. Yediyurappa comes here for campaigning, I will join him,” he said.