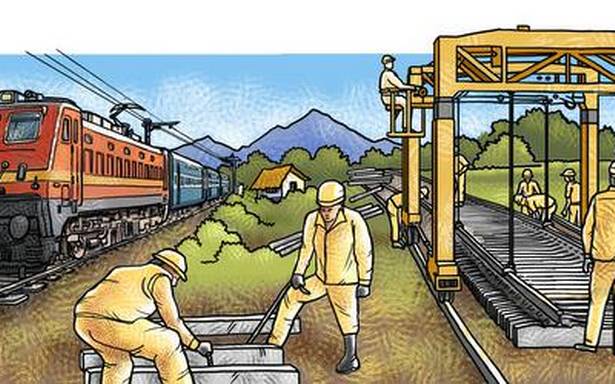 Multiple railway projects are under way in Tamil Nadu, after a pandemic-induced hiatus, and some of them are part of the long-pending demands of passengers. When they are completed and if the railways keeps its word, by 2024, the State will definitely be ‘future ready’ in rail transport, experts point out

The track expansion projects, being executed with a deadline, are part of National Rail Plan-2030 of the Indian Railways to be ‘future ready’ by catering to the ever-growing passenger capacity, improving operational efficiency and striking a balance between passenger and freight traffic to increase revenue from freight traffic.

Southern Railway General Manager John Thomas said the infrastructure projects were being executed in a time-bound manner under Vision 2024, with their progress being monitored continuously. The projects would pave the way for greater speed, punctuality and safety. These projects would help to decongest the highly saturated routes.

The long-pending projects of the Madurai-Bodinayakkanur, Milavittan-Melmarudur and Tiruthuraipundi- Agastiyampalli lines would give a big push to passenger train operations in the remote southern parts. Two important projects — the Tambaram-Chengalpattu third line and the expansion of the Mass Rapid Transit System — are expected to further enhance the suburban network in Chennai.

The gauge conversion between Madurai and Bodinayakkanur has been a long-pending project. The railways is set to complete the work by January next. The Andipatti-Theni section has been completed, and work in the Theni-Bodinayakkanur section is in progress. However, railway officials are doubtful of the operation of trains from Madurai to Bodinayakkanur in Theni district. The non-shifting of the overhead power lines will cause delay in getting clearance for train operations between Theni and Andipatti. A senior official said, “The high-voltage line was not an issue when the project, along with electrification, was planned. But, with electrification not done, clearance for the Andipatti-Theni stretch will not be possible without the power line being shifted.”

Another issue that stands in the way of the commissioning of the 90-km line, whose services were suspended for more than a decade, is the strong opposition to the construction of a subway at Vadapalanji in Madurai district. “Half the work for the subway has been completed, but locals are not allowing us to complete the work. They are insisting on the manned level crossing being retained,” the official said.

The two issues prevent the linking of the most backward district of Theni with the State’s capital through Madurai. The district, earlier served by a British-era rail network to transport people and goods, especially spices, to other parts of the country, would have to wait even after gauge conversion is completed.

Madurai MP Su. Venkatesan, citing the completion of the project, said train services could not be resumed unless a final decision was taken by the State Government to clear the hurdles.

The other important rail project which would help bolster passenger traffic is the gauge conversion, in progress, in the Thiruthuraipoondi-Agasthiyampalli section through Vedaranyam. The project is being executed by the Tiruchi Division as part of the Mayiladuthurai-Thiruvarur-Karaikkudi gauge conversion. It is planned to be completed by January next. The completion of the project would restore rail connectivity after a long gap, besides freight traffic, especially the transport of salt from Agasthiyampalli.

Prafulla Verma, Chief Administrative Officer, Southern Railway Construction Organisation, Chennai, said the gauge conversion work was going on as per schedule with the track having been laid up to 16 km. The construction of buildings for the six halt stations, including at Kariyapattinam, Neivilakku, Thopputhurai, Vedaranyam and Agasthiyampalli, was completed along 79 minor bridges.

The officials are confident that the ₹250-crore project would be completed by January next.

Southern Railway is set to take up a new broad gauge line from Karaikal to Peralam through Thirunallar, for which ₹177.69 crore has been sanctioned. The project, to be executed under Vision 2024, would restore the rail link between Karaikal and Peralam after a gap of over three decades.

The third line project from Tambaram to Chengalpattu would help to segregate express and suburban trains, leading to operational efficiency and an increase in the speed of the long-distance trains. With the MRTS expansion, the suburban train services would get a boost, offering thousands of residents in southern parts of Chennai the cheapest mode of public transport.

Southern Railway will give an impetus to freight traffic to augment revenue. It is executing a project from Madurai to Thoothukudi through Aruppukottai. The new line will be fully operational once the Milavittan-Melmarudur section is completed. The 18-km work will be completed by the end of this month once the Commissioner of Railway Safety conducts the inspection. It will benefit three power plants and a cement factory in Thoothukudi district.

A railway official said the new line would help to transport raw materials from the Thoothukudi port. Cement can be taken directly from the plant to the port and then other parts of the country. Movement of raw materials to those plants by rail will not only be cheaper, compared with road transport, but will also be faster, helping to decongest roads in Thoothukudi. The cost of the project, which started in 2018, is ₹260 crore.

The next phase of work between Melmarudur and Aruppukottai through Vilathikulam and Puthur, for 66 km, will be taken up after the sanction of the detailed project report by the Railway Board. The project would help to popularise the Madurai-Thoothukudi industrial corridor proposed by the State Government.

Another important project which would help to pave the way for freight traffic in the western parts is the doubling of the Salem-Magnesite-Omalur section. The project, to be carried out for 11 km, is expected to be completed by the end of 2022 at a cost of ₹22 crore.

Since the Mettur thermal plants are located in the Salem-Mettur dam section, the doubling would help to speed up coal transport as well as passenger traffic.

The new line project in the Rameswaram-Dhanuskodi section to a stretch of 18.70 km, which was announced two years ago, is yet to get a detailed project report. Land acquisition is yet to start.

Southern Railway has also made a headway in electrification. To cut the expenditure on diesel for operating long-distance trains and freight trains, the railways has been focussing on electrification. This financial year, it would complete electrification of nearly 675 km of tracks in the sections of Madurai-Manamadurai, Nagapattinam-Velankanni, Salem-Thalaivasal, Thalaivasal-Vridhachalam, Pollachi-Podanur, Tiruchi-Pudukottai-Karaikudi, Karaikudi-Manamadurai-Virudhunagar, Manamadurai-Ramanathapuram, Palani-Pollachi-Palakkad and Punalur-Kollam.

(With inputs S. Sundar in Madurai, R. Rajaram from Tiruchi and S.P. Saravanan from Salem)