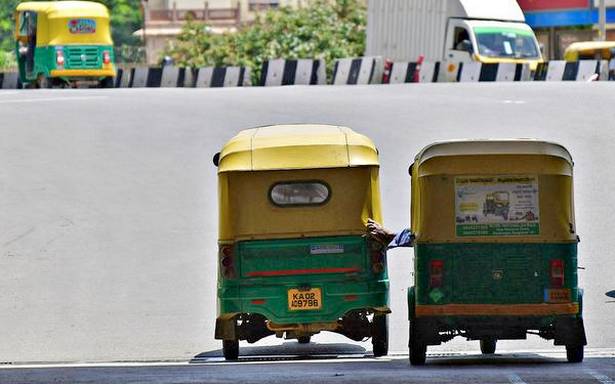 Transport Dept. says they are economical mode of travel for short distance

The State government’s decision to allow e-bike taxi services in Karnataka has not gone down well with autorickshaw drivers, who have expressed strong reservations, saying it will eat into their business.

The Transport Department plans to introduce fares in two slabs — first 5 km and 5 to 10 km. The department is working on the fare structure and it is said that likely to be lower than autorickshaw fares.

T. Somashekar, president of Namma Chalakara Trade Union, opposed the decision and said that auto and taxi drivers have already started a campaign by sending postcards to government heads, such as the Chief Minister and the Transport Minister.

“If they introduce e-bike taxis, auto and taxi drivers who have already registered vehicles will suffer a lot financially. At present, autos and taxis are picking up or dropping passengers near bus stands, metro station, or railway stations. When e-bike taxis come, these drivers will not be in a position to compete with big companies or aggregators providing e-bike services and end up losing business,” he said.

C.N. Sreenivas, of Autorickshaw Drivers’ Union attached to CITU, added, “After the outbreak of the pandemic, auto drivers have suffered a lot. We are struggling to earn even ₹200 a day. Introduction of e-bike taxis will do more harm. On the other hand, new metro lines are getting operational, which is also resulting in loss of business for the autos. We want the government to drop the proposal of introducing bike taxis in the interest of autorickshaw drivers.”

Mr. Sreenivas said that there are 2 lakh autorickshaws registered in Bengaluru alone.

However, Commissioner of Transport N. Shivakumar defended the new scheme by saying that e-bike taxis will give an economical and alternative mode of transport for people and is aimed at addressing last- and first-mile connectivity to public transport . “E-bike taxis are aimed at complementing the public transport system. People who are relying on public transport such as metro or buses will use the service to reach the bus stop or metro stations. Service of the e-bike taxis is restricted only to 10 km and only one person can book the service, whereas autos and taxis are allowed to run long distances. E-bike taxis may have some impact on autorickshaws or even on city buses, but it is being introduced with the greater objective of providing an alternative and economical mode travelling for shorter distance.”