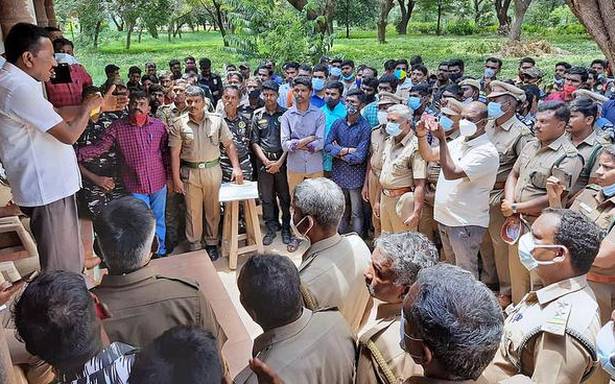 A day after the arrest of Valparai Forest Range Officer K. Jayachandran, frontline staff of the Forest Department attached to the Pollachi and Tiruppur divisions of the Anamalai Tiger Reserve (ATR) boycotted work on Friday in protest.

Members of the Tamil Nadu Forest Staff Association gathered outside the ATR Pollachi Division office as part of the protest.

In a letter addressed to the senior officials of ATR, Association president and Manambolly Forest Range Officer A. Manikandan demanded that a special team should investigate into the registering of “false case” against Mr. Jayachandran and into the alleged lack of safety for the frontline staff of the Forest Department.

He said the members would go on an indefinite protest till the demands were met.

He demanded that Mr. Jayachandran must be let out on bail at the earliest.

According to the police, three persons including the son of a Madras High Court judge were provided accommodation at the Forest Department guest house at Sirukundra on September 21. In the evening, Mr. Jayachandran allegedly had a verbal altercation with the three while being in an inebriated state. Following this, the head clerk of the judicial magistrate court, Valparai, registered a complaint against the Forest Range Officer at Valparai police station. He was arrested and remanded in judicial custody on Thursday, sparking protest from the forest staff.

However, sources in the Forest Department claimed that Mr. Jayachandran consumed liquor only after his working hours on Tuesday evening and was attempting to warn the three persons regarding the presence of wild animals.

Retired Assistant Conservator of Forests, Coimbatore, and former president of Tamil Nadu Forest Staff Association M. Nazir on Friday wrote to the Chief Wildlife Warden and to the Principal Chief Conservator of Forest urging “action at the earliest for justice and staff welfare” in this issue.