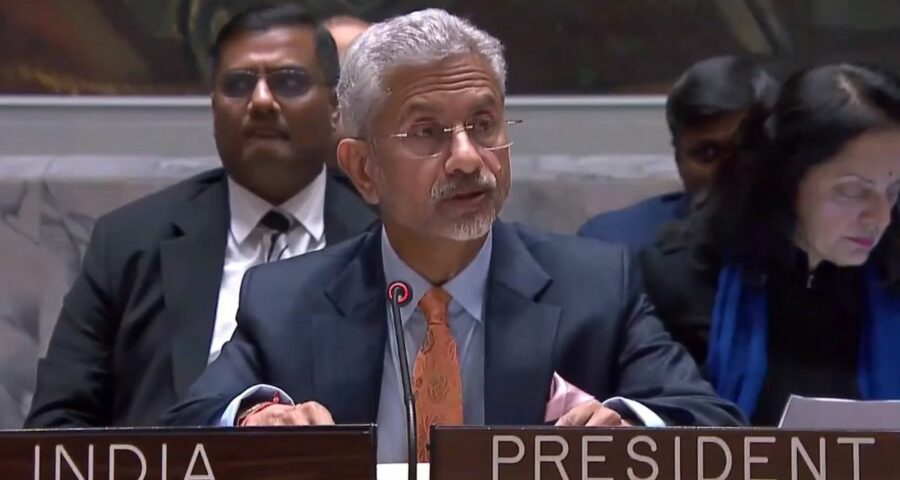 Multilateral platforms are being misused to justify and protect perpetrators of terrorism, External Affairs Minister S Jaishankar said on Wednesday during an open debate at the United Nations Security Council, in a veiled attack on China and its close ally Pakistan.

Presiding over the UN Security Council open debate on ‘Maintenance of International Peace and Security: New Orientation for Reformed Multilateralism’, Jaishankar also said the knock on effects of conflict situations have made a strong case that it cannot be “business as usual” in the multilateral domain.

“On the challenge of terrorism, even as the world is coming together with a more collective response, multilateral platforms are being misused to justify and protect perpetrators,” he said.

His remarks appeared to be a reference to repeated holds and blocks on proposals to blacklist terrorists, particularly those based on Pakistani soil like Jaish-e-Mohammed chief Masood Azhar, in the UN Security Council’s sanctions committee by veto-wielding permanent members such as China.

Addressing the powerful 15-nation Council, Jaishankar said that reform is the need of the day. “And I am confident that the Global South especially shares India’s determination to persevere,” he said.

“All of us are aware that the ‘Question of Equitable Representation on and Increase in the Membership of the Security Council’ has been on the UNGA agenda for well over the last three decades. While the debate on reforms has meandered aimlessly, the real world meantime has changed dramatically,” he said.

Jaishankar said, “we have convened here today for an honest conversation about the effectiveness of multilateral institutions created more than 75 years ago. The question before us is how best they can be reformed, particularly as the need to reform is less deniable with each passing year.”

The open debate, a signature event held under India’s Presidency of the Security Council for the month, was addressed by UN Secretary General Antonio Guterres and President of the 77th session of the General Assembly Csaba Korosi.

Jaishankar said the call for change has been accelerated by growing stresses on the international system that the world has experienced in recent years.

“On the one hand, they have brought out the inequities and inadequacies of the way the world currently functions. On the other, they have also highlighted that a larger and deeper collaboration is necessary to find solutions,” he said.

Jaishankar said that the knock on effects of conflict situations have also underscored the necessity for more broad based global governance.

“Recent concerns over food, fertilizer and fuel security were not adequately articulated in the highest councils of decision making. Much of the world was therefore led to believe that their interests did not matter. We cannot let that happen again,” he said, an apparent reference to the Ukraine conflict and its impact on food and fuel security across the world.

“When it comes to climate action and climate justice, the state of affairs is no better. Instead of addressing the relevant issues in the appropriate forum, we have seen attempts at distraction and diversion,” he said.

During the COVID pandemic, he said, many vulnerable nations of the Global South got their first vaccines from beyond their traditional sources. “Indeed, the diversification of the global production was itself a recognition of how much the old order had changed,” he said.

Underscoring that each one of these examples makes a strong case why it should not be business as usual in the multilateral domain, Jaishankar said, “we not only need to increase stake – holdership but also enhance the effectiveness and credibility of multilateralism in the eyes of the international community and in the eyes of global public opinion. That is the purpose of NORMS” – New Orientation for a Reformed Multilateral System or NORMS.

Jaishankar emphasised that member states from Latin America, Africa, Asia and the Small Island Developing States should have “credible and continuing representation” in the Security Council.

“Decisions about their future can no longer be taken without their participation. Equally important is to make working methods and processes of the global institutions, including this Council, more accountable, objective and transparent. Failing to do so would only lend this Council to charges of politicization,” he said.

He underlined that while the debate on reforms has meandered aimlessly, the real world meantime has changed dramatically. “We see that in terms of the economic prosperity, technology capabilities, political influence and developmental progress.”

While noting that at every milestone in multilateral diplomacy, the sentiment for reform has been expressed at the highest levels, Jaishankar questioned why the international community is then failing to deliver on such a strong desire for change.

“The answer lie in the nature of the IGN process itself,” he said, referring to the Inter-Governmental Negotiations on UN Security Council reform.

“One, it is the only one in the UN that is conducted without any time frame. Two, it is also singular in being negotiated without any text. And three, there is no record keeping that allows progress to be recognized and carried forward.

“Not just that. There are actually suggestions that negotiations start only when consensus has been achieved. Surely, we cannot have a more extreme case of putting the cart before the horse,” he said.

Jaishankar voiced concern that three decades since the formation of the Open Ended Working Group on UNSC Reforms, “we have nothing to show for precisely these reasons. This is creating an intense sense of frustration among the wider membership. Attempts to propose piece-meal changes will not be accepted by them as an alternative.”

He said the UNSC debate and its outcome will not only help determine what kind of “United Nations we wish to see, but also what kind of global order that best reflects contemporary realities.”