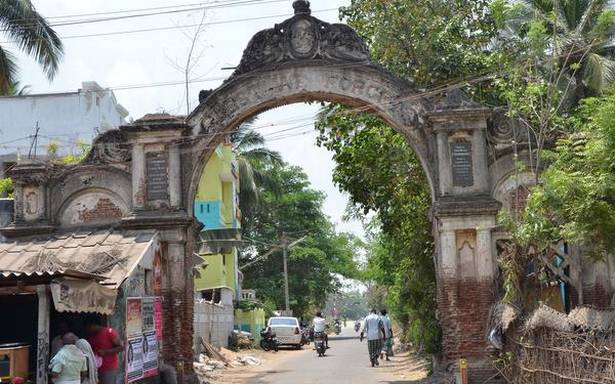 A few hundred among the Indian soldiers who participated in the War were said to be from Tiruchi district, including some from Lalgudi and nearby villages

The Archaeological Survey of India (ASI) has planned to take up restoration and conservation works on a commemorative arch, built during the British rule recognising the role of Indian soldiers in the victory of the Allied powers in World War I, at Keezha Valadi near Lalgudi in Tiruchi district.

The memorial was erected by Dewan Bahadur G. Krishnamachariar and opened by Dewan Bahadur Sir T. Desikachariar, Trichinopoly District Board president, on August 10, 1922. A plaque on its pillar says that it was erected “in commemoration of the glorious victory of the Allied Arms in which the Indian troops played a prominent part.”

A few hundred among the Indian soldiers who participated in the war were said to be from Tiruchi district, including some from Lalgudi and nearby villages. “Lest we forget,” reads the engraving on top of the arch that has been languishing in neglect for long, ironically.

Referred to as ‘Pachampettai Valaivu’ in Tamil, the arch is situated on the entrance to Pachampettai on the eastern part of Keezha Valadi. It serves as a gateway for villagers from Periyavar Seeli, Mayil Arangam, Pachampettai and Thirumanamedu villages to the Lalgudi-Tiruchi Road. Rajya Sabha MP Tiruchi N. Siva and others have been demanding the conservation of the historic structure.

The move is part of the efforts of ASI’s Tiruchi Circle, which came into existence about a year ago, to conserve lesser known heritage structures and monuments in central and southern districts. “We are inspecting and expediting efforts to conserve lesser known monuments. We are also seeking to improve amenities and have requested the respective district administrations to provide amenities such as approach roads and sign boards, “ Dr. Raj said.

The ASI circle is also planning to sensitise the district officials on the importance of being careful while planning development projects in heritage sites. “We are trying to sensitise officials to the provisions of the Ancient Monuments and Archaeological Sites and Remains (AMASR) Act,” he said.