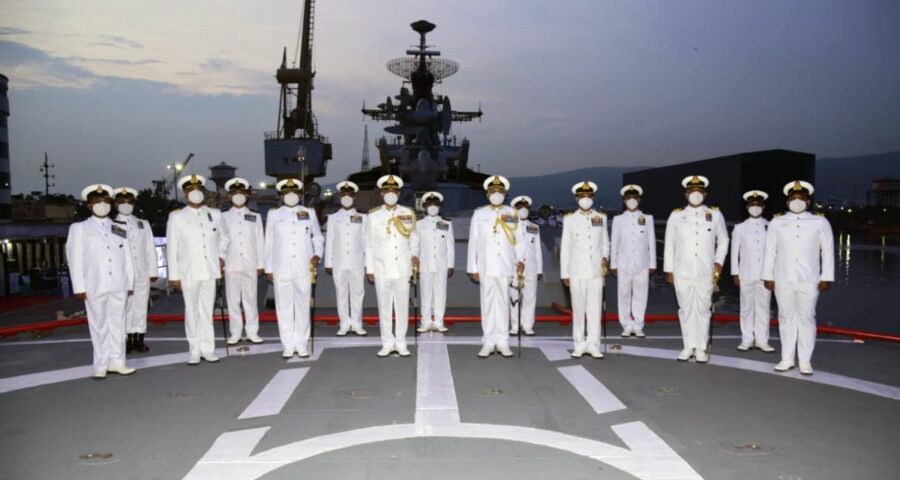 China has been commissioning three new destroyers every year while India has been barely completing one destroyer every 2-3 years, reports Ajai Shukla.

Indian Naval Ship Rajput, the Indian Navy’s first and oldest destroyer, sailed into the sunset on May 20.

The lead ship of India’s five Kashin-class destroyers, which was built by the erstwhile Soviet Union and commissioned in May 1980, was decommissioned in Visakhapatnam after 41 years of service.

Beyond the nostalgia of decommissioning, in which the naval ensign and the commissioning pennant are ceremonially lowered for the last time at sunset, the Indian Navy will be preoccupied with a hard operational reality: Before the end of this decade, all five of its Kashin-class destroyers — called the Rajput-class in India — will be decommissioned.

To replace them on the line there are only four new destroyers under construction.

True, the four new 7,300-tonne destroyers being built under Project 15B at Mazagon Dock, Mumbai are significantly more muscular than the older Rajput-class vessels.

INS Visakhapatnam, INS Mormugao, INS Imphal and INS Porbandar will bristle with weaponry designed to destroy targets in all three dimensions — on the surface, underwater and in the air.

In a major capability upgrade, each destroyer will have two helicopters on board. These will include the newly procured MH-60R Seahawk, a helicopter so packed with weapons and sensors that it is labelled a ‘flying frigate’.

Even so, naval planners in New Delhi are uncomfortably aware that, even after the four Project 15B destroyers join the fleet, India will have just 10 destroyers, against 50 destroyers that China’s People’s Liberation Army Navy fields.

The PLAN has been commissioning three new destroyers every year while Indian defence shipyards have been barely completing one destroyer every 2-3 years.

The Indian Navy, however, takes solace in a projected increase in its frigate numbers with seven frigates being constructed domestically under Project 17A and four more Talwar-class frigates under acquisition from Russia, of which at least two are to be built in India.

But here again, the PLAN has more than thrice as many frigates as India and is adding to those numbers faster.

INS Rajput and its four follow-on destroyers of the Rajput-class were constructed in the 61 Communards Shipyard in Nikolaev, which is in present-day Ukraine. Her original Russian name was Nadezhny, which means hope.

She was commissioned as INS Rajput on May 4, 1980 at Poti, Georgia by India’s then ambassador to the Soviet Union, Inder Kumar Gujral, who went on to become prime minister.

She was also the first Indian naval ship to be affiliated with an Indian Army regiment — the Rajput Regiment.

Owing to the ongoing pandemic, the decommissioning ceremony at the Naval Dockyard, Visakhapatnam, was a low-key event, attended only by in-station officers and sailors, with strict observance of COVID-19 protocols.