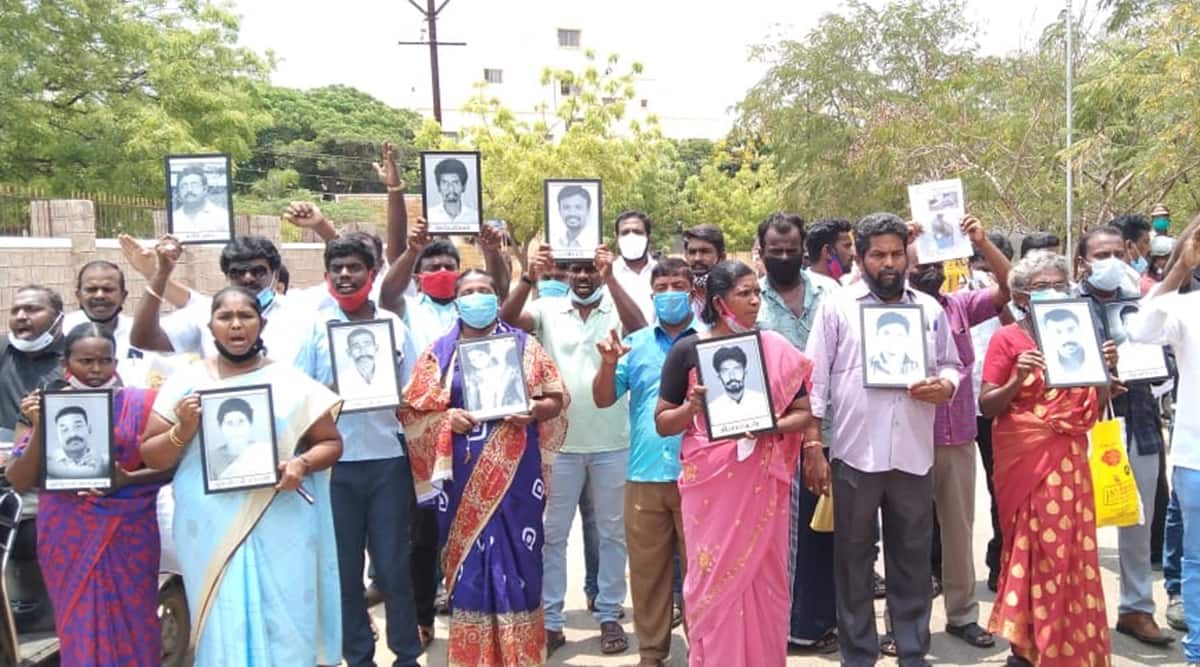 Family members of those killed in the Thoothukudi police firing in May 2018 submitted a petition to the District Collector Thursday stating that the Vedanta-owned Sterlite copper plant should not be allowed to reopen to manufacture oxygen. Holding photographs of the deceased, protesters raised slogans outside the collector’s office against the Supreme Court’s decision allowing the operation of oxygen production units at the Sterlite copper plant.

Those at the protest alleged the motive behind producing oxygen was to have a backdoor entry to restart the copper unit, holding the Sterlite plant responsible for the death of 13 people who were shot by police personnel during a protest in May 2018.

Anti-Sterlite People’s Confederation, one of the organisations actively involved in protesting against the functioning of the copper smelter unit, informed local residents and activists to observe ‘Black Day’ on Thursday as a mark of protest against the government’s decision to reopen the plant. The Confederation had appealed to the residents to hoist black flags in their residences and put Rangoli to show their discord.

Speaking to indianexpress.com, Viyanarasu said their protest will continue until the Supreme Court revokes its decision. “If the government doesn’t have a say on its own state issue, then what is the need of such governance? Only the state government can handle the law and order issue… What is the need to manufacture oxygen in a plant that had remained closed for three years, are there no other places in the state? Who will take responsibility if there is some mishap during the manufacturing process? The decision to reopen the plant is an irresponsible act by the government. Even opposition parties have joined hands, they could have asked the government to think of other sources to manufacture oxygen but they didn’t do that, the residents of Thoothukudi have lost hope in these parties,” he said.

Vedanta had moved the Supreme Court to request an emergency hearing citing the oxygen crisis prevailing in the country. The company said it could produce 1000 tonnes of oxygen and can supply it to the states free of cost. On the court’s suggestion, the state government which was initially against the decision to open the plant held a public hearing last Friday at the district collector’s office. The key question was whether local residents were in agreement to re-open the plant for oxygen production. District Collector K Senthil Raj had then told indianexpress.com that most of the stakeholders were against the idea and he had reported the same to the government.

On Monday, Chief Minister Edappadi K Palaniswami had convened an urgent meeting with representatives of recognised political parties wherein it was unanimously decided to reopen the plant with certain restrictions. The government then passed an order allowing the plant to reopen for a period of four months for standalone operations of oxygen production alone under the supervision of a monitoring team which comprises officials from the state and district administration and as well as the representatives of local environment experts. The government further said the company will be allowed to supply oxygen to other states only after fulfilling the oxygen requirements of Tamil Nadu.