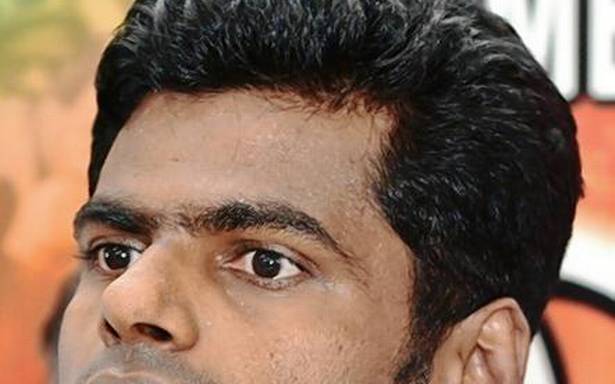 A rapid rise for the former IPS officer, who joined the party in August 2020

K. Annamalai, vice-president of the BJP in Tamil Nadu, was appointed to the top post on Thursday. Arun Singh, national general secretary and headquarters in-charge, made the announcement.

He succeeds L. Murugan, who was on Wednesday inducted into the Union Council of Ministers as a Minister of State for Fisheries, Animal Husbandry and Dairying, and Information and Broadcasting.

The party appears to have performed a balancing act in social engineering through the choice of the former IPS officer of the Karnataka cadre, who belongs to the community of Vellala Gounders, and the induction of Mr. Murugan, who is from the Arundathiyar community, into the Union Council of Ministers.

As soon as it emerged that Mr. Murugan was being made the Union Minister, the name of Mr. Annamalai was doing the rounds, besides those of Nainar Nagendran, Karuppu Muruganandam and R. Srinivasan.

The appointment marked a rapid rise for Mr. Annamalai: he joined the BJP in August 2020. Within days of joining the party, he was made one of the vice-presidents. In the Assembly election held in April, Mr. Annamalai was fielded in Aravakurichi in Karur district, a constituency having a considerable number of Muslims. Mr. Annamalai knew the challenge, but put up a fight, reaching out to the minority voters by promising them houses. He polled around 68,550 votes, but lost to the DMK candidate by about 25,000 votes.

Hailing from Thottampatti in Karur district, Mr. Annamalai, 36, did his undergraduate degree in mechanical engineering at the PSG College of Technology, Coimbatore, and postgraduation in business administration at the Indian Institute of of Management, Lucknow, in 2010.

He joined the police force in 2011. He was the Superintendent of Police for Udupi and Ramanagara districts. He earned the reputation of being a tough officer by taking measures to resolve students’ issues and communal problems and to curb criminal activities. At the time of quitting the service in 2019, he was the Deputy Commissioner (South), Bengaluru.