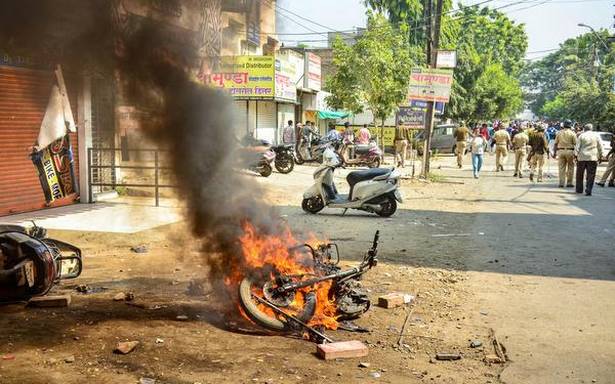 85 held in Amravati, Nanded after violence; Section 144 in Pune rural

The situation in Amravati district and other parts of Maharashtra was under control, State Home Minister Dilip Walse-Patil said on Sunday.

Mr. Walse-Patil said the motive behind the rallies called by certain organisations which led to the violence and a heightening of communal tensions in some cities would be probed. He added that no casualties have been reported from Amravati where a curfew has been imposed and Internet services suspended.

On Friday, violence had erupted out in at least three cities in the State — Amravati, Malegaon and Nanded — after the Mumbai-based Raza Academy had reportedly called for a day-long shutdown to protest against incidents of mosques being vandalised in Tripura.

“A curfew has been imposed in Amravati and the situation is now completely under control there… the BJP had given a call for a bandh today in rural Amravati. However, we have made provisions that no law and order situation should arise there. All reinforcements that could be required by the State police in sensitive places like Nanded, Malegaon, Yavatmal and other areas are in place… anti-social elements who incited the violence will be strictly investigated,” Mr. Walse-Patil said.

On the possible role of the Mumbai-based Raza Academy, the Minister said an investigation would be conducted.

“We will probe this. Be it the Raza Academy or any other organisation, their motive behind calling for a protest rally will be investigated,” he said, adding that the government would also assess the damage to property during the demonstrations.

The violence and heightening of communal tensions in Maharashtra because of something that may or may not have happened in far-off Tripura was “utterly unwarranted”, said Deputy Chief Minister Ajit Pawar, who urged citizens to maintain the peace and help local police by reporting rumours and inflammatory posts on social media.

Section 144 of the Criminal Procedure Code (CrPC) has been imposed in both urban and rural areas of Amravati for the next three days as well as parts of Akola district, said authorities.

A total 50 persons have been taken into custody in Amravati as an uneasy calm prevailed over the district following two days of violence, vandalism and arson. Only medical services are allowed over the next three days with a ban on gatherings of more than five persons.

“Fifteen cases have been lodged thus far and a total 50 persons arrested. Sticks, rods and other items used as weapons have been confiscated from these persons and there is robust police deployment in the sensitive areas of the district,” Amravati Commissioner of Police Dr. Aarti Singh said.

Eleven State Reserve Police Force (SRPF) teams have been stationed in the district and SRPF units from Jalna, Nagpur and Hingoli districts have been moved to the district.

On November 13, a curfew was imposed in Amravati after a mob threw stones at shops during a bandh allegedly organised by the BJP in protest against rallies taken out by members of the minority community the previous day. Hundreds of people, many of them holding saffron flags and raising slogans, had come out on streets which resulted in violence and damage to property. Police resorted to a baton charge to disperse the crowds.

The Nanded police have arrested 35 people and said the situation was now under control. An official said the violence which erupted on November 12 occurred mainly in the Vazirabad and Deglur Naka areas of Nanded city and that some police personnel had been injured in the stone pelting.

“Four offences are registered in Nanded regarding the incident. The Nanded police have so far arrested 35 persons. The situation is under control and peaceful as of now,” said Superintendent of Police Pramod Kumar Shewale.

As a precautionary measure against the backdrop of tensions in Amravati, Section 144 was also imposed in the rural areas of Pune district for the next seven days till November 20.

Pune District Collector Rajesh Deshmukh said the preventive order had been issued to ensure that anti-social elements do not take advantage of the situation to incite violence among various groups.

The order prohibits any person from posting or sharing any communal or objectionable content on social media while warning that the administrators of WhatsApp groups where such content is found would be held responsible.

Demanding that the ruling Maha Vikas Aghadi (MVA) government arrest the real miscreants behind the violence, BJP State President Chandrakant hit out at the Uddhav Thackeray-led government and said the BJP had become a soft target.

“No one knows what exactly happened in Tripura, but an adverse reaction to a presumed case of communal violence there occurs in Amravati, Malegaon and Nanded and the BJP is targeted,” Mr. Patil said.