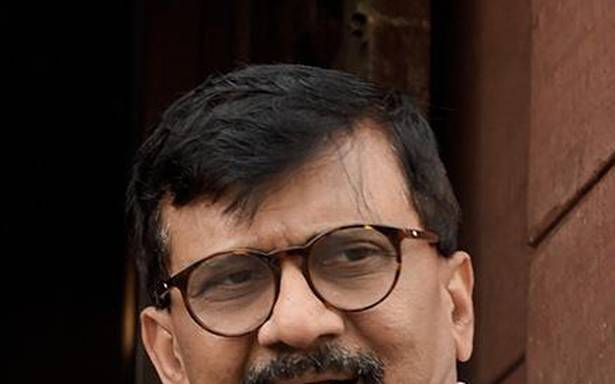 Recent verbal slanging matches between leaders of the tripartite Maha Vikas Aghadi government (MVA) in Maharashtra and the opposition Bharatiya Janata Party are being followed by the slapping of defamation suits by MVA leaders against their BJP accusers.

An editorial in the Sena mouthpiece Samana, whose executive editor is Mr. Raut, had criticised Mr. Patil for daring Rural Development Minister Mr. Mushrif to face the Enforcement Directorate rather than resort to strong-arm tactics to ‘stifle’ Mr. Somaiya’s attempts to expose an allegedly multi-crore corruption scandal.

In a pointed written response, which was published in the Saamana as well, Mr. Patil, taking a jibe at Mr. Raut, reminded the Sena leader how his wife’s name (Varsha Raut) had cropped up in suspicious transactions pertaining to the Punjab and Maharashtra Cooperative Bank scam.

“I will be sending a legal notice to Mr. Patil within four days regarding the allegations he has made pertaining to the PMC bank scam…what sort of baseless remark is that? I would not have been in politics if me or my family members had committed such scams. While some leaders file defamation suits of ₹50 crore or ₹100 crore, I will be filing one against Mr. Patil of only Re.1 and 25 paise … he is not worth more than that amount,” said an irate Mr. Raut.

The Saamana editorial had hit out at Mr. Patil for ‘threatening’ Mr. Mushrif with an ED probe, caustically remarking from when did Mr. Patil have any experience of facing such interrogations.

Shooting a droll response, Mr. Patil had said: “Yes, it is true I have no experience with the ED as one needs to possess a lot of ‘black money’ to get face such a probe… Your [Mr. Raut’s] wife had received an ‘unaccounted loan’ of ₹50 lakh in the PMC Bank scam case and you were most agitated after the ED had issued a notice for an inquiry into the misappropriation. In the end, you [Mr. Raut] had tried to shake off the probe by returning the money.”

Mr. Patil further said that if Mr. Raut had to face so much trouble in returning the ₹50 lakh, then Mr. Mushrif would have a far harder time in clearing a massive sum of ₹127 crore. (Mr. Somaiya has accused Mr. Mushrif of being involved in a ₹127 crore money laundering case)

The Saamana edit had further alleged that central agencies like the ED and the Central Bureau of Investigation were in the pocket of the BJP-ruled Centre, which misused them for suppressing leaders of non-BJP parties.

Responding to Mr. Raut’s defamation notice against him, Mr. Patil quipped: “Because Sanjay Raut is my friend, I would advise him to increase the amount from ₹1.25 … I am of the belief that even if we trade political barbs, our sentiments should not be hurt.”