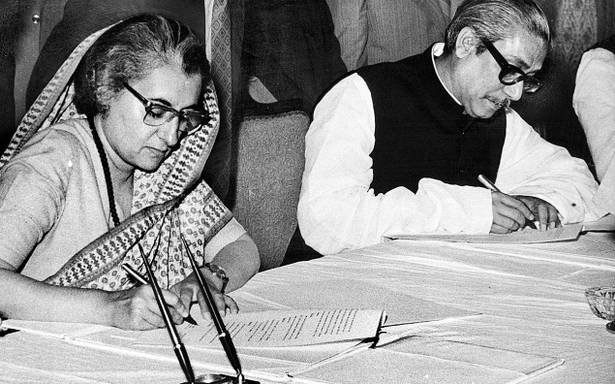 Decisions of Delhi, Washington after brutality unleashed by Pakistan recalled

“To all hands, don’t squeeze Yahya at this time,” wrote the then U.S. President Richard Nixon in his own hand in a memo that crystallised Washington’s policy during Bangladesh’s liberation war.

As Bangladesh commemorates 50 years of its Liberation movement, that began with the declaration of Independence by the Mukti Bahini (Freedom Fighters) led by Sheikh Mujibur Rahman on March 26, 1971, the spotlight also turns to events at the time in India and the United States, that were recounted by Prime Minister Narendra Modi and Bangladesh PM Sheikh Hasina in Dhaka, and through a special remembrance in the U.S. Congress last week.

A few days after the Mujib declaration, Prime Minister Indira Gandhi moved a resolution in Parliament condemning the Pakistani crackdown as “genocide”. On April 3, she met with the Tajuddin Ahmed, Mujib’s nominee for PM of the provisional government, and promised support, including an office in Calcutta that belonged to the R&AW intelligence agency. Mrs. Gandhi insisted on secrecy, however, until she was able to garner international support for the cause. While the US was dead set against India’s stand, Mrs. Gandhi found some support in Moscow, and the Indo-Soviet treaty of Peace and Cooperation was signed in August 1971.

During his visit to Dhaka, Mr. Modi described opposition protests that he had taken part in — against the Soviet treaty and demanding that India recognise Bangladesh immediately.

“I must have been 20 to 22 years old when my colleagues and I did a Satyagraha for the freedom of the people of Bangladesh. I was arrested and had an opportunity to go to jail in support of Bangladesh’s Independence,” he said at the special commemoration event on Friday.

Back in 1971, far from the public eye, the government’s plans for Bangladesh’s liberation, the diplomatic outreach and training and arming the Mukti Bahini cadres, was all already under way by August of the year. The Soviet treaty dented India’s non-aligned policy, but Soviet naval support and military supplies assisted New Delhi in the war that followed.

Through that time, the U.S. policy was chronicled through a series of memos, and taped conversations between Mr. Nixon and Dr. Kissinger.

“I think that in fact, the April 28 memo is one the most important documents of the time, because this memo set the course of American policy towards Bangladesh’s liberation war,” said military historian Srinath Raghavan, who authored the book 1971: A Global History of the Creation of Bangladesh.

“It set the U.S. ‘tilt’ (towards Pakistan) as policy and asked everyone in the U.S. government to fall in line,” he added, referring to the fact that Mr. Nixon put the words down in his own hand and then underlined the word “Don’t” three times for emphasis.

In a special commemoration in the U.S. Congress last Monday, Representative Shiela Lee Jackson said, “Approximately 2 to 3 million people were killed, over 200,000 women were raped in organised rape camps, and over 10 million people were displaced, most finding refuge in India.” Ms Jackson called for an apology from Pakistan and an acknowledgement from the U.S. of its “solidarity” with Bangladesh.

While many historians have focused on the more sensational comments made by Mr. Nixon and his National Security advisor Henry Kissinger about India’s role and their anger at Prime Minister Indira Gandhi, the secret White House Memorandum (Action 27870/April 28,1971) titled “Policy Options towards Pakistan” is a detailed account of the U.S.’s strategy during the year, that eventually led to it moving its “Seventh fleet” into the Bay of Bengal in an attempt to deter the Indian Army from advancing towards Dhaka (Dacca) during the two-week war in December 1971.

For friends of Bangladesh, a walk down memory lane

In the Memo, that was declassified 30 years later in 2001, Dr. Kissinger proposes three options to Mr. Nixon: The first, to support Pakistani President General Yahya Khan’s political and military plans, without sending any ammunition; the second, to remain neutral, and delay all aid, food and military equipment until India-Pakistan tensions were resolved, and the third, to help Gen Yahya to “end the war”, establish an autonomous government in East Pakistan, and give control of aid, food shipments and military equipment to West Pakistan.

East Pakistan was still reeling from a deadly cyclone that had killed 5 lakh people in October 1970, so the food aid was particularly crucial.

Mr. Nixon, who was at the time negotiating an opening with China through the Pakistani government, made it clear that he would choose the most radical option 3, which was then adopted as policy, despite the fact that the U.S. Consulate in Dhaka had been warning about the “reign of terror by the Pakistani military” for weeks.