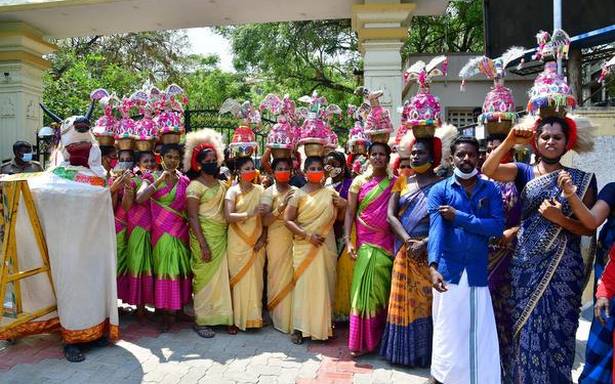 Seeking permission for performing folk arts during temple festivals up to midnight, the folk artistes submitted a petition at the Collectorate on Wednesday.

Led by their president Pon Pandi and secretary T. A. Sudalai Kani, members of Confederation of Folk Artistes Welfare Association of Tirunelveli District, submitted the petition even as good number of ‘karagam’ exponents performed in the traditional attire.

The petitioners said that the lives of over 4,000 folk artistes of the district that had got affected due to the pandemic in last March was yet to improve as the restrictions on performance during temple festival was continuing. Even as the artistes were eagerly waiting for the new season that would usually start in Chiththirai, the first month of Tamil calendar, the latest round of restrictions had wiped-out their hopes.

“We used to get offers during temple festivals organised between ‘Panguni’ and ‘Vaikaasi’ wherein we used to perform between 9 p.m. and 5 a.m. Since the Tamil Nadu Government has imposed restrictions in the wake of pandemic, no one has received offers so far, thus leaving our families in the lurch. Considering our pathetic condition, the State Government should allow us to perform during the temple festivals at least up to midnight. Or, the government should give us ₹10,000 per artiste for the loss we’re facing now even though they have not registered their names with the welfare board,” Mr. Pon Pandi said.