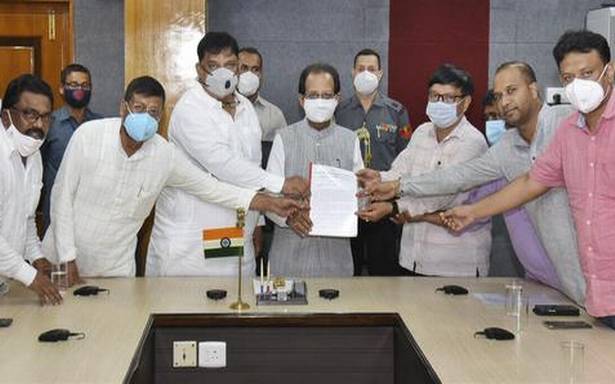 The All Assam Minority Students’ Union (AAMSU) on Saturday set a seven-day deadline for Chief Minister Himanta Biswa Sarma to allot land for thousands of people being evicted from large swathes of government land in Darrang district’s Sipajhar.

The union also accused the State administration of a pre-planned move to instigate the people by not giving them sufficient time to vacate the land.

“We did meet the Chief Minister on the Gorukhuti project [reclamation of 77,000 bighas of government land from squatters] and decided that the people will be given space elsewhere to resettle. But there was a disconnect between the CM and the Darrang district administration, which showed no interest in the resettlement of the people to be evicted,” AAMSU president Rejaul Karim Sarkar said in northern Assam’s Kharupetia.

He said the eviction notice was given to 244 families in Dhalpur No. 3 village at midnight and were asked to vacate within a few hours.

“They did not give time to the people to dismantle their houses and three mosques. Although the people agreed to shift quietly, the police started damaging their belongings and setting them on fire. This agitated the villagers,” Mr. Sarkar said.

The AAMSU leader said the government must allot land within seven days for the displaced families. “We have agreed to move out, but there is no clarity on where they will go. We cannot trust the district authorities since 800 families evicted on September 20 were shown an inhabitable area where 300 families are already living,” he said.

In Guwahati, a team of eight All India United Democratic Front (AIUDF) legislators submitted a memorandum to Governor Jagdish Mukhi demanding an impartial probe into the Sipajhar incident where two people, including a minor, were shot dead.

Muslims in Assam have been harassed in the name of National Register of Citizens, D (doubtful) voters, declared foreigners, population control bill, cattle protection and such policies, he said.

“It seems that the Chief Minister and his government derive sadistic pleasure from killing and harassing poor people belonging to the minority community. This is being done to please their BJP and RSS masters since the Hindutva forces are losing ground elsewhere in the country,” Mr. Islam said.

He said it was natural for people with their backs to the wall to react. “If you strike a beehive, won’t the bees sting? The Constitution of India bestows the right to private defence, but that does not mean they should be shot. A CM is for all communities, not for Hindus alone,” he said.