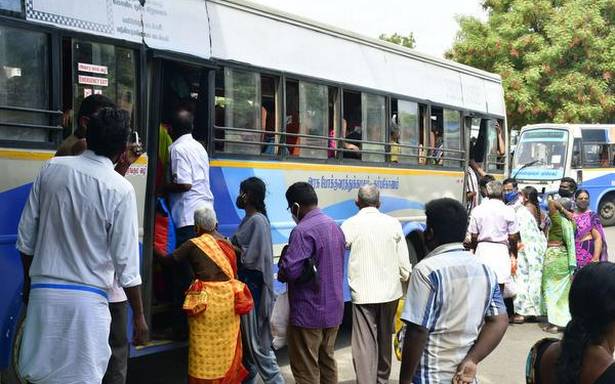 A large number of people thronged the Central Bus Stand on Sunday to proceed to their home towns in view of the week-long total lockdown to be enforced from Monday by the Government as a preventive measure to contain the spread of COVID-19 pandemic.

Several hundreds of buses were operated by Tamil Nadu State Transport Corporation buses to destinations across the State, as also Bengaluru. “We did not report any overcrowding as there were enough number of buses for customers to travel comfortably. The move was to ensure that workers in the city, especially labourers and daily-wage labourers, were safeguarded from the pandemic,” a TNSTC employee said.

S. Kalaichelvi, who had been working at a supermarket in Thiruverumbur, boarded a bus to Thanjavur after the lockdown was announced. “I worked the morning shift at the supermarket, and am now going home for a week. We will not have work, but at least I will meet my parents and spend some time with them,” she said.

The travelling public could manage to maintain personal distance in the buses as there was no overcrowding. However, some cautioned that there could still be increase in the number of cases in the coming days. “We do not know how many asymptomatic people travelled. They could infect those residing in their home towns too. We will know in a few weeks,” a resident in Thillai Nagar said.

Meanwhile, operators of omni buses were not in a position to ply their vehicles. “We heard from our counterparts in other districts that there was no patronage and had to return empty,” R. Balakrishnan, president, Tiruchi Omni Bus Operators Association told The Hindu. The bus operators had incurred losses and did not plan on starting their services until the government provided some relief by way of loan waivers, he said.