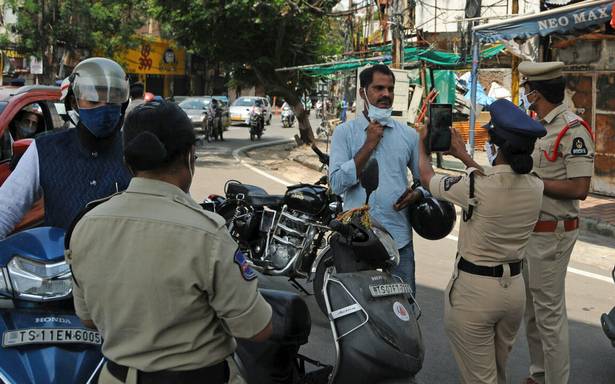 The Telangana police was criticised for enforcing the COVID-19 lockdown with the use of force.

Taking a serious view of the police’s highhandedness in enforcing the State-wide lockdown, the Telangana government is taking action to rein in the force.

This was after both Ministers took to social media stating they have received several complaints on how police stopped vehicles of food delivery executives and others in distress.

“Received several complaints on the police stopping the food delivery services & others in distress. Will discuss with @TelanganaDGP and resolve asap,” Mr. Rao tweeted.

Mr. Mahmood Ali said: “Have been receiving several requests on this, definitely will conduct an emergency meeting with the police department regarding stopping the essential services.”

Hours after criticism on how police in Telangana enforced the COVID-19 lockdown with the use of lathis and stopped hundreds of delivery executives of various e-commerce platforms on Saturday, the DGP, in a late-night tweet, said that he held a review meeting with three commissioners of police — Hyderabad, Cyberabad and Rachakonda — regarding the issue.

“Held a review meeting with 3 commissioners of police, regd, the several requests flagged with ‘Disruption of essential services including food deliveries etc, eCommerce, while tightening of LockDownToday’. Directed to ensure a seamless supply ahead, while executing #StrictLockdown,” Mr. Reddy wrote on Twitter.

He further said that all three Commissioners of Police have been instructed to get in touch with all stakeholders and redress their grievances at the earliest for smooth supply of essential services while tightening the lockdown enforcement.

On Saturday, the DGP himself took to the road in a widespread crackdown on lockdown violators and inspected several junctions in the capital.

Several videos of police beating the motorists and delivery executives in the presence of one of the Commissioners of Police have gone viral on social media. In one such video, a boy riding a scooter without a helmet is seen being beaten up by the Cyberabad police for reportedly violating the lockdown norms. In another video clip, the police are seen bringing down their lathis on delivery executives of a service company while checking their IDs. The executives were let off as they were on duty.