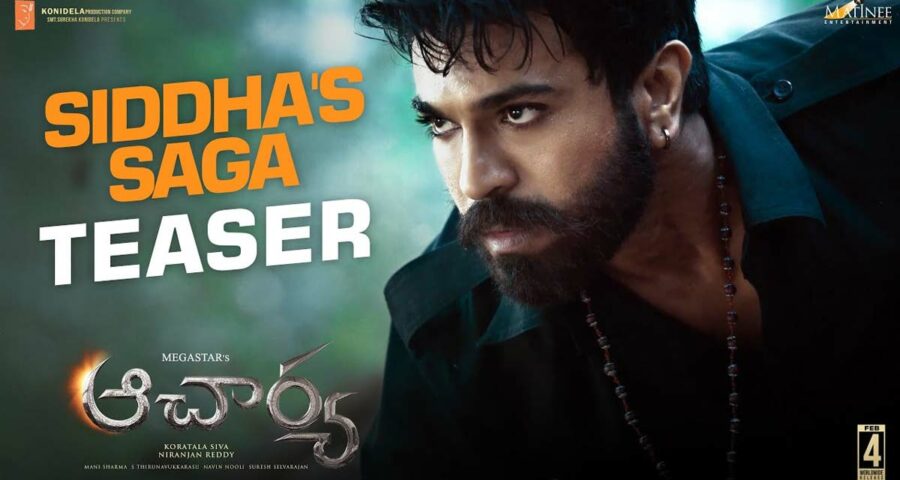 Today evening the makers of Acharya unveiled Siddha Saga teaser, which is grabbing the attention of mega fans. The teaser  shows an intense, and solid character of a Naxalite named Siddha. The teaser sees him in an intense avatar, and it is all about Ram Charan’s character.  Ram Charan is running through the jungle and attacking naxalites.  The teaser also shows father-son duo of Chiranjeevi and Ram Charan sharing screen space and fearlessly facing cheetahs.

According to the makers, Siddha Saga teaser has crossed 2 Million+ views with 200K+ Likes  on Youtube and it is currently trending.

Acharya is a social message oriented movie, written and directed by Koratala Siva, is being produced by Ram Charan and Niranjan Reddy under the Konidela Production Company and Matinee Entertainment banners.  Though the movie was initially scheduled for 13th May release. However, due to Covid-19, the makers postponed it and now it will arrive at the theaters on 4th  February 2022.

Apart from Chiranjeevi and Ram Charan,  Acharya , the big budget film also has Pooja Hegde and Kajal Aggarwal in the female lead roles whereas Sonu Sood in the role of a villain. Jishu Sengupta, Tanikella Bharani, Ajay are also the part of Acharya which  is jointly produced by Matinee Entertainment and Konidela Productions.